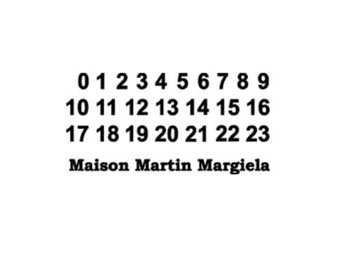 Attending the Royale Academie of Fine Arts, Antwerp between 1977 and 1980, the Belgium born designer Martin Margiela moved on to become a freelance designer after graduating. In 1985 he worked for Jean Paul Gaultier staying there until 1987 when he branched out on his own. In 1988 he showed his first collection which led to his talent for deconstruction taking off. Known for pushing the boundaries, his inspirations lay in recycled clothing, punk and medieval detailing. Taking note from Japanese avantgardists Rei Kawakubo, Margiela carried on his aesthetic. Some times considered the 7th of the Antwerp 6, Margiela had already left school to work for Gaultier. However, Margiela as well as the Antwerp 6 all featured heavily avant garde.

In 1997 Margiela was appointed to design at Hermès to try to reinvigorate the label. In 2002 the Diesel brand acquired the company and in 2009 it was reported that Margiela has left the business without anyone lined up to succeed him. Known to maintain an extremely low profile, Margiela never had his photo taken and always remained back stage after his shows. Being almost invisible, his unconventional approaches to clothes speak for themselves.