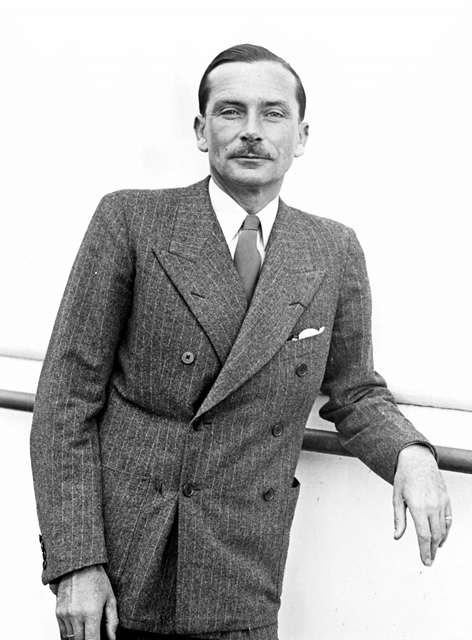 Lucien Lelong’s parents owned a small couture house that produced clothes, focussing on a modern look. At the age of 20 Lelong joined the business and immediately redesigned the boutique. Installing black carpets, walls, ceilings and sofas – he wanted it to resemble a black-lined jewellery box.

On the day he was supposed to present his first collection for the family business, the show had to be cancelled due to the onset of World War I. Lelong was enrolled in service and sent to the trenches, serving as an intelligence officer.

Lelong resumed his career after the war, at the same time Coco Chanel’s career was taking off. Lelong undermined Chanel with his business acumen, offering discounts to society women who agreed to be photographed in his dresses. With this extra advertisement his business flourished and by 1926 Lelong was employing 1,200 staff.

Lelong began to focus his style on the idea of body in motion and sport. With the thought that the clothing would show its true shape in movement, he designed dresses with narrow pleats that moved with the garments. Lelong began to oversee the designs of his clothes, designing nothing himself as he had the desire to industrialise haute couture.

In 1934 he created a ready-to-wear line separate from his couture, making him one of the earliest designers to do so.

By 1937 Lelong was president of the Chambre Syndicale de la Haute Couture. After the German invasion he was responsible for negotiating with them. The Nazis moved the buildings entire archive to Germany with the overall intent to move the Paris couture industry their country. Under the new plan Paris ateliers along with their designers would be moved to Germany or Austria, where they would train a new generation of German dressmakers. The Germans believed that couture would become German, not French.

Lelong advised that the plan was unfeasible and would not work. The French haute couture was dependant of skilled artisans in tiny ateliers, each specialising in one small detail. The skills were un-teachable and took decades to reach the level of craftsmanship. Declaring each country had their own right to produce fashion, the Nazis’ backed down and returned the Haute Couture archive.

Having succeeded, Lelong began to refocus on his business in 1941 were he had appointed Christian Dior and Pierre Balmain as designers. Around this time he went to America to persuade buyers to return to Paris. Only partly successful, it was only when his protégée Dior introduced the ‘New Look’ that they came flooding back in 1947. That same year Lelong retired.

Lucien Lelong created elegant, understated ladylike clothing. His courage and determination helped save Parisian haute couture. Seen as more of a coordinator than designer, Lelong was responsible for encouraging Dior, Balmain and Givenchy.