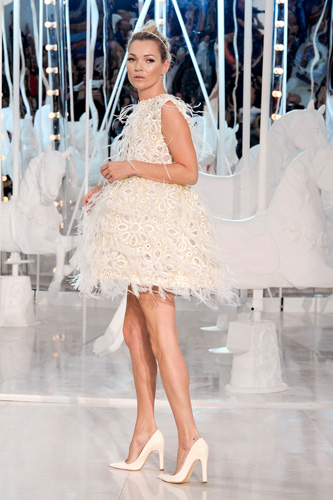 Kate Moss was born in 1974 in London and is one of the world’s most iconic supermodels. She is renowned for changing the face of the modeling industry through the popularising of the waifish figure.

Kate was discovered when she was 14 by Sarah Doukas, the founder of Storm Model Management while in JFK Airport. Even at such a young age Kate was a near instant success in the industry with her slender, boyish look contrasting strongly with the other models at the time. From her first photo shoots it was easy to see Kate’s potential as the ‘anti-supermodel’ of the 90s.

The catalyst for the great success of Kate’s career was being shot by Corinne Day, the series of black and white images for magazine The Face, were titled ‘The 3rd Summer of Love’ and the campaign is still one of Kate’s best known.

In 1993, a year after being discovered, Kate starred in the Calvin Klein ‘Obsession’ campaign photographed by Kate’s boyfriend at the time, Mario Sorrenti. This campaign featured Kate partly nude and worked to exhibit her slight figure, it was the first time this body shape had been put in such high profile in the fashion industry, and it was a stark contrast to campaigns with other supermodels such as Naomi Campbell.

Kate’s emergence into the fashion industry sparked controversy with nearly every campaign and catwalk show, with some critics thinking she was too skinny and even questioning her health while others saw her success as a daring next step forward for the world of fashion.

Despite the controversy surrounding her, Kate landed campaigns with an endless list of prestigious fashion houses including Gucci, Dolce & Gabbana, Calvin Klein, Burberry and Chanel and shot for over 300 magazine covers. Kate has appeared on the cover of British Vogue alone more than 30 times. W magazine also published an edition with nine different covers, all featuring Kate. Throughout her career her extensive work has led Kate to work with an endless list of well known photographers developing a close friendship also with Mario Testino. The fashion photographer even names Kate his muse.

Kate, through her waifish figure and brazen attitude prompted the look dubbed ‘heroin chic’ in the early 90s. While an exciting fashion movement, her look caused controversy and increased speculation over Kate’s weight. Kate spoke out about the speculation blaming the stark contrast between herself and her contemporaries: “It was just the time. It was a swing from more buxom girls like Cindy Crawford and people were shocked to see what they call a ‘waif’. How many times can you say ‘I’m not anorexic?”

Through all of the media speculation Kate’s career continued to thrive, In 2005 Kate launched one of her most memorable and successful campaigns as the face of Rimmel London cosmetics, the television ads are still running to this day.

Later in 2005 Kate’s career was threatened by a cocaine scandal, Kate was dropped from several fashion campaigns in a matter of months, one of the biggest for the Swedish fashion house H&M. However though her reputation seemed tarnished the unstoppable supermodel continued to propel even further towards success and later that year Kate was awarded the Model of the Year prize at the British Fashion Awards, a covetable title in the British fashion industry, though the award caused fresh controversy.

Taking her fashion industry prowess even further in 2007 Kate designed a collection of clothes for Topshop, the range launched at Topshop’s Oxford Circus store where Kate herself modelled a dress from the collection attracting huge amounts of press attention. The line was a huge success with pieces instantly selling out. The popularity of her designs was tangible evidence of the power of her success and influence.

Another testament to Kate’s universal success was when she sat, while pregnant, to be painted by renowned artist Lucien Freud. The resulting painting has been displayed in exhibitions around the world and sold for £3.5 million.

As so often happens with supermodels Kate has also worked to some degree in the music industry and has appeared in many music videos and even featured vocals in some cases. She has appeared in videos for a collection of popular artists such as Elton John, Marianne Faithful, Primal Scream and Oasis, to name just a few. Kate also famously regrets missing out on appearing in George Michael’s video for the song ‘Freedom’ in which supermodels such as Naomi Campbell and Linda Evangelista starred, she does however star in his 2012 comeback video for the song ‘White Light’.

In 2012 Kate stood alongside other iconic British models such as Naomi Campbell, Lilly Cole and David Gandy to represent British fashion in the closing ceremony of the Olympic Games.

Kate has a daughter, Lila Grace Moss Hack with Dazed & Confused founder Jefferson Hack. Between 1994-98 Kate dated and was briefly engaged to Johnny Depp, her relationship with Johnny Depp had a strong impact on Kate’s life and together as a couple they contributed to the popularising of the 90s grunge look.

Kate also had a highly publicised relationship with Libertines front man, Pete Doherty. The pair were engaged in 2007 but split up later that year. Kate began dating musician Jamie Hince of the Kills in 2007 and they later married in 2011.