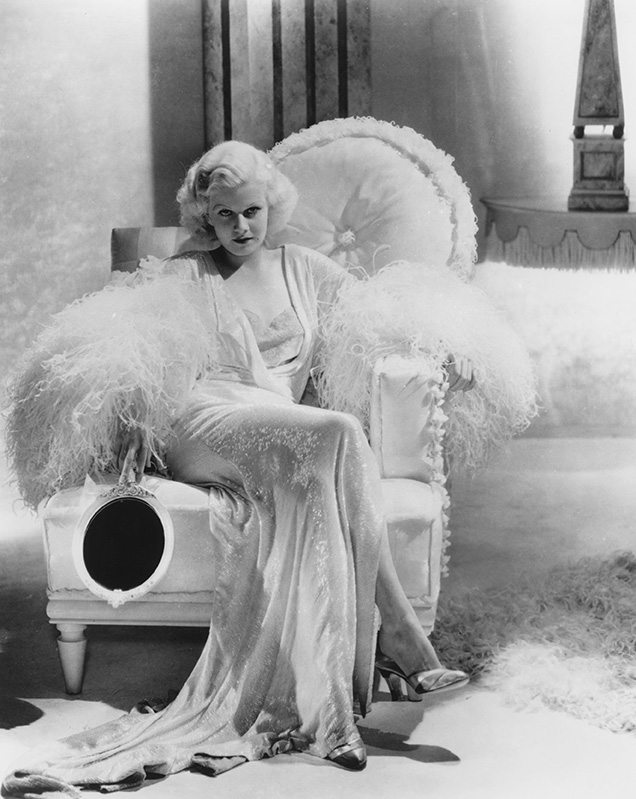 Jean Harlow was born Harlean Harlow Carpenter on March 3rd1911. Often referred to as the “platinum blonde” and the original “blonde bombshell”, Harlow’s unique blend of sex appeal and comedic talent paved the way for actresses such as Marilyn Monroe.

As a young girl, Harlow was nicknamed “Baby” and didn’t learn her name was Harlean until she began to attend school. Harlean was discovered at Fox Studios, while driving a friend to an audition. A chance meeting led to a Fox executive approaching her about possible auditions, to which she said she wasn’t interested. After her friend bet she wouldn’t go back and test for the studio, Harlean returned to the casting centre and signed in under her mother’s maiden name, Jean Harlow.

Harlow’s film debut was a small role in the 1928 silent movie Honor Bound.After a string of small silent film parts, Harlow got her big break starring in Hell’s Angels (1930), when she replaced Norwegian actress Greta Nissen, whose native accent was deemed unsuitable for the talkie.

In order to promote Harlow’s image, the producers of the 1931 film Gallagher changed it to Platinum Blonde, sparking a craze of fans dyeing their hair to match Harlow’s blonde bob. Her publicity team also launched a competition to any colourist who could match the actress’s signature shade. Jean created the colour with a weekly treatment of peroxide, ammonia,  and Lux soap flakes. Harlow was also the ribbon-cutter for Max Factory’s “Blondes Only” room, at the opening of the Hollywood salon.

Harlow joined MGM and began her contract starring in Red-Headed Woman (1932). The studio paired Harlow with Clark Gable in a series of successful films including Red Dust (1932), Hold Your Man (1933) and China Seas (1935). As with MGM’s other leading ladies, Harlow was dressed by Adrian, but created her own unique approach to style. She favored monochromatic curve-skimming gowns, often wearing white to create a luminous effect with her platinum hair and ivory skin. She avoided accessorizing her gowns with jewelry, believing that fine dresses should be allowed to stand alone; for this reason her gowns didn’t feature many patterns or large embellishments. However, she always wore an anklet, as a good luck charm. Harlow believed in minimalism, and quality over quantity stating, “It saves you money in the long run to get a good dress of which you’re always proud.” In  stark contrast to the Joan Crawford’s many wardrobes and reputation as a clotheshorse, Jean Harlow’s style was built on long-lasting, practical investment pieces: “At most, I buy six costumes a season, usually two black crepe frocks, a dinner and a restaurant dress, and two evening gowns. My wardrobe is never a large one.”