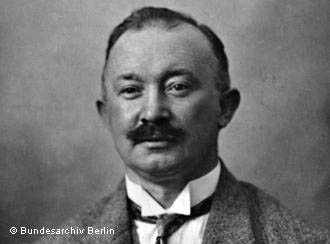 The youngest of five siblings, Hugo Ferdinand Boss’s parents owned a lingerie and linen shop in Metzingen. With only one of his siblings surviving infancy, Boss was chosen as the heir to the family business.

Boss started an apprenticeship as a merchant before enlisting in the army in World War One.

In 1924 Boss opened a clothing factory with financial backing from two other manufacturers. Originally employing around 30 workers, the business produced handmade garments. The company’s first major commission was for Rudolf Born, a textiles distributor who was supplying clothing for the National Socialist Party. During the 1930s, Boss advertised his business as a ‘supplier of Party equipment since 1924’.

Due to Germany’s economic difficulties, in 1931 Boss was forced to file for bankruptcy. However, he reached an agreement with his creditors leaving him some machines to restart his business. The same year Boss became a member of the Nazi Party and a sponsoring member of the Schutzstaffel.

The company’s sales started to increase dramatically from 1932. With the country’s restriction on clothing manufacturing, Boss established his business in manufacturing uniform and work wear, the only products that restrictions were lifted on ensuring the businesses production could carry on.

In 1938 the company received a large commission for army uniforms. With the company’s revenue increasing, the business made uniforms for the German Armed forces and the Waffen SS until 1945.

From the increase of business since the 30s, Boss constantly experienced recruitment difficulties. During the Second World War production intensified due to supplying the German forces. With the staffing problems, Boss had to employ 140 forced labourers and 40 French prisoners of war.

When the war ended, Boss was forced to undergo de-nazification  whereby he was pronounced guilty and fined. The reasons for his sentence included his membership of the National Socialist Party, his fiscal involvement with National Socialism and his friendships with leaders within the Party.

In 1948 Hugo Boss died. His son-in-law Eugen Holy took over the business.

Holy started to increase manufacturing in the late 40s. By 1950 the company had 128 employees, which number continued to rise as the business obtained its first orders for men’s suits.

In 1960 the off-the-peg suit for men started production and by the end of the decade Holy’s sons Jocehn and Uwe took over the company.

In 1984 the business obtained a fragrance licence. The following year the business was listed on the German Stock Exchange. In 1985 the company started golf sponsorship with Bernhard Langer becoming the first professional golfer to wear Hugo Boss. In the same year the company also started sponsoring tennis. In 1989 the company added an eyewear range to the portfolio.

However, shoes weren’t integrated into the company until 2004.

With watch collections and golf wear added to the portfolio towards the end of the 90s.1998  marked the launch of the first women’s collection. Next year a casual line, BOSS Orange was added.

In the following years more brands were launched as well as children’s, home ware and beauty lines.  Hugo Boss has recently acknowledged and apologised for the company’s maltreatment of forced labour workers during World War Two.

The Hugo Boss style is known to be sophisticated and chic. Recognized for the excellent tailoring and beautiful fabrics used for their suits, the business creates garments that are modern classics. With a variety of brands, the company offers a versatile choice of contemporary elegant garments.