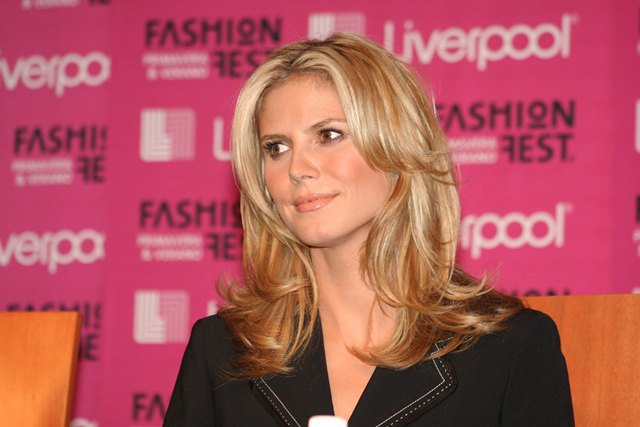 Heidi Klum is a model and actress born in 1973 in Germany. Alongside her successful modelling and acting career Heidi is a Television host, busnesswoman, fashion designer, producer and singer.

When she was 21 a friend convinced Heidi to enter a national modelling contest, Model 92. Heidi won the competition and was offered a modelling contract with Metropolitan Models New York. Heidi’s graduated high school before accepting the contract.

Heidi is well known for appearing on the cover of a Sports Illustrated Swimsuit issue and for her work with Victorias secret. She has also appeared on the cover of many high end fashion magazines including Vogue, Elle and Marie Claire.

As part of her work as a Victorias Secret Angel Heidi hosted Victorias Secret fashion show in 2002, 2006, 2007 and 2009. Heidi currently hosts Project Runway, which is filmed at Parsons School for Design, she received an Emmy Award nomination for the show for each of the firs four seasons.

Heidi has also been the Subject of a series of body painting works by artist Joanne Grier, she was featured in several editions from 1997-2010 and wrote the forward to Gair’s book, ‘Body Painting, Masterpieces.’ In 2009 Heidi was also the one woman subject of ‘Heidilicious’, (a photo book by Ian Rankin) shoot by photographer Rankin.

Alongside her modelling career Heidi has also worked as an actress, appearing in several TV Shows, including Spin City, Sex and the City, Yes, Dear and How I Met Your Mother. She has also appeared in films, Blow Dry and Ella Enchanted as well as making came appearances in The Devil Wears Prada and Perfect Stranger.

In 2010 Heidi announced the end of her 13 year run as a Victoria Secret Angel and has since transitioned into more of a businesswoman. She has collaborated with New Balance and Amazon.com to launch a clothing line and has recently signed a deal host a new show on Lifetime TV.

Heidi has steadily expanded her entrepreneurial reach embarking on man business ventures, she has designed a clothing line for catalogue Otto, shoes for Birkenstock and Jewellery for Mauawad. She was also one of the designed for the Victorias Secret lingerie line. Heidi also works as an artist and has had several pieces featured in US art magazines

Some members of the fashion elite have commented on Heidis limited work as a fashion model. Karl Lagerfeld said: “She is more bling bling and glamorous than current fashion”.

In 2007 Heidi was named by Forbes as third on the list of the Worlds 15 Top-Earning Supermodels.

Heidi married musician seal in 2005 and they had three children together, she appeared in the music video for his song “secret”. They went on to divorce on good terms in 2012. Heidi was previously married to stylist Ric Pipino.