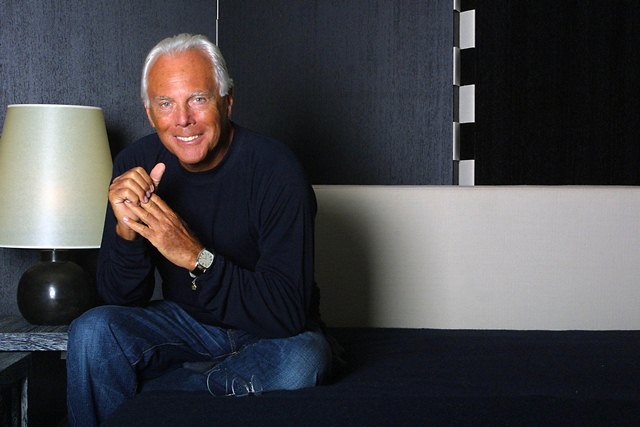 Giorgio Armani grew up with his two siblings in northern Italy. Aspiring to study medicine, Armani enrolled at the University of Bologna. In 1953, after two years of study, Armani left to serve in the Italian army at a military hospital. The experience in the service made him realise that medicine was not for him.  In 1957 Armani accepted a job as a merchandiser for the well known department store La Rinascente. This was followed by Armani working as a designer for Nino Cerruti, and then as a freelance designer for various companies. The experience enabled Armani to develop a rich and varied style.

With his skills honed and several years of experience behind him, Armani was ready to launch his own label. Following his friend Sergio Galeotti’s suggestion that they open a company together, the two business partners officially founded Giorgio Armani S.P.A. in 1975, launching a men’s and women’s ready-to-wear collection.

The business steadily grew gaining international customers and success. In 1980 the company still hadn’t gained recognition within the United States. But, that year, Armani was asked to costume design Richard Gere’s outfits for Paul Schrader’s “American Gigolo”. The huge success of the film and Armani’s perfect drapery of the silk and sartorial fit helped launch Armani into American and increased worldwide success.

In 1982 Armani appeared on the cover of Time magazine, the first designer to do so since Christian Diorin 1940, cementing his American success.

Armani embodied the nineties style with his soft shouldered suits and fluid drapery. Continuing to grow and remain current, by the end of the nineties Armani had over 2000 stores worldwide and had expanded into home goods and book publishing.

Armani was recognised by New York’s Guggenheim Museum in 2000 as the first living designer to be featured. The exhibition celebrated the social and cultural influence of Armani’s career focussing on his pioneering involvement in the cinema. The exhibition has since been featured internationally at some of the world’s most prestigious museums.

Armani has been honoured with many awards during his career including the award for the Best International Designer and the Lifetime Achievement Award for menswear from the Council of Fashion Designers of America.

In 2003 Armani was awarded with the Rodeo Drive “Walk of Style” for his groundbreaking role in bringing fashion and cinema together. Three years later Armani was honoured with the Dino Ferrari award for being the most influential fashion designer in the world. Armani was also gifted with the Elle Award, the “Leonardo Award” and in 2008 he was given the Legion d’Honneur from Nicholas Sarkozy.

From the response and requests of his clients Armani launched a haute couture line, Armani Prive. Presenting his first collection in 2005, the designs offered Armani’s exquisite tailoring at a bespoke level.  The same year Armani formed a partnership with Emaar Properties to launch a series of Armani Hotels and Resorts. Armani created the concepts that would define the style and mood of the hotels and resorts focussing on elegance, harmony and the Armani lifestyle. The first hotel opened in Dubai in 2009 and was followed by a Milan opening in 2010.