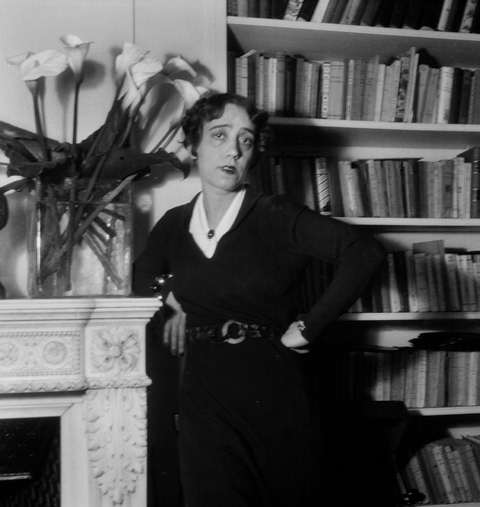 Born into a wealthy family, Elsa Schiaparelli spent her childhood in Rome. Schiaparelli attended the University of Rome, where her Father was Dean, to study Philosophy. Whilst studying, Schiaparelli published a book of poems that her parents deemed to be unsuitable. Sent to a convent by her family, Schiaparelli went on a hunger strike which enabled her to leave.

Schiaparelli moved to London aged 22 accepting a job as a nanny. Now so close to France, in 1913 she made her first trip to Paris and visited the Rue de la Paix.

Whilst in London Schiaparelli met William de Wendt, whom she married in 1914 at the outbreak of the war. The following year the pair left England and moved to Nice.

In 1919 Schiaparelli and her husband moved to New York where she met Marcel Duchamp and Picabia. The year also saw the birth of her first child, Yvonne.

Schiaparelli moved back to Paris in 1922 where she continued her friendship with Picabia. Starting to design clothing, Schiaparelli opened her first atelier on the Rue de Seine selling knitwear and sportswear.

Accompanying a friend to Paul Poiret’s fashion house, Schiaparelli was struck by Poiret’s magnificent designs. Here she met Poiret, who offered her a coat as a gift, starting off a lifelong friendship.

In 1927 Schiaparelli opened a boutique at 4 Rue de la Paix. With the help of Armenian refugees, Schiaparelli launched a collection of knitwear featuring butterflies. The year also saw her begin to design town outfits for her new boutique and hire Jean Clement to work as a designer of accessories.

Schiaparelli launched her first full collection in 1929, which lead to her described as ‘one of the rare creative talents’ of the time. The following years saw her business grow successfully. In 1930 the Mad Cap bonnet was created along with the first evening ensemble, 1933 saw a boutique open in London and Schiaparelli dressed Katherine Hepburn. The following year three perfumes were launched and by 1935 Greta Gabo, Gloria Guinness and the Duchess of Windsor were all frequenting her store.

Schiaparelli created more famous collections throughout the following decades including the ‘Music’ collection in 1937 which featured the shoe shaped hat, a telescopic hat with buttons in the shape of crayfish, lobsters and swans.

A male fragrance was launched in 1939 and the following year a licence agreement was signed with Kaiser as stocking manufacturer.

By 1949 Schiaparelli was so popular boutiques opened in the United States with distribution of the pret-a-porter collection. Boutiques were restricted to one per city to retain exclusivity.

Due to financial difficulties which escalated since the end of the war, Schiaparelli closed her fashion house in 1954.

Elsa Schiaparelli died in her sleep in 1973, at the age of 83. She was known for her mix classic designs with outrageous elements. With surrealist elements, Schiaparelli’s designs are witty and irreverent showing where art and fashion unite.