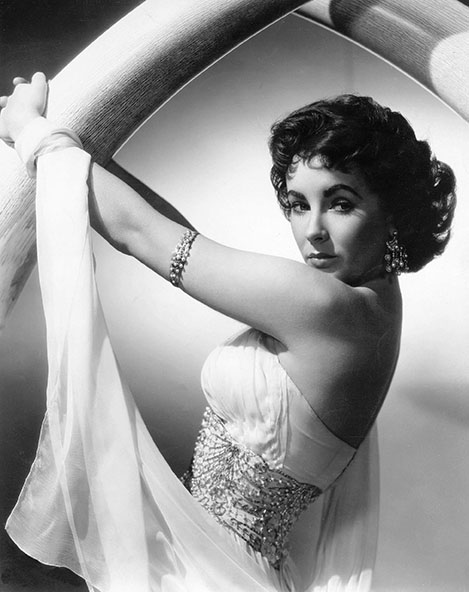 Elizabeth Taylor is considered to be the greatest movie star of all time, appearing in almost fifty films and in many TV series. As one of the most prominent and enduring icons of Hollywood’s Golden Age, Elizabeth Taylor has left behind her a legacy, of not only a string of successful and classical films, but also through her humanitarian work, which she has been honoured for with numerous lifetime awards.

Taylor was born Elizabeth Rosemond in 1932 to American parents just outside of London. Shortly before World War II, Taylor returned to USA with her family and had her first lead role in the film ‘National Velvet’ which propelled her to child stardom. Taylor is also well known for hr extravagant performance in 20th Century Fox’s film ‘Cleopatra’, for which the film won four Academy Awards.

Another of Taylor’s most renowned films remains ‘Who’s afraid of Virginia Woolf?’, where the actress went outside of her typical typecasting of a glamorous, seductive sex icon and this time portrayed a frumpy middle aged woman.

Much like many other actresses of the time, Taylor’s sense of style was influenced heavily by MGM costume designers who she worked with, including Edith Head and Helen Rose who also dressed the likes of Grace Kelly. Even though Taylor’s fashion sense was typical of actresses at the time, her unique face set her aside from the rest. From a young age she had been recognised as an exceptionally pretty child, which didn’t change as she got older. Dramatically lined eyes on a perfectly structured face complete with heavy brows made Taylor a cut above the rest. Her violet eyes and double lashes caused a sensation in the film industry, and if anything made her all the more seductive.

Whilst she dressed like many other actresses in Hollywood, her short curly brown hair gave her an air of mysterious femininity, as opposed to the obvious appeal of a blonde. And whilst in films she was portrayed as an enchantingly dressed sex-goddess, off screen Taylor had created her own passion for dressing herself. Dresses that were cinched in tightly at her tiny waist waist, highlighting her feminine figure, were a favourite, as were high-waisted skirts. Taylor also enjoyed the higher end of fashion, and was often seen clad lavishly in fur coats and designer gowns.

One of the things that Elizabeth is most famously remembered for is her love of jewellery and she is thought to have had one of the most significant jewellery collections in America. Taylor even wrote a book titled ‘My Love Affair With Jewellery’ where she describes one of her greatest passions intertwined with loving men, as many of the items had been gifts from her husband Richard Burton. Jewellery was a staple accessory for every outfit Taylor wore, and she was rarely seen without it. Big, bold statement jewellery often dripped from her ears and neck in vivid colours such as ruby red, and emerald green proved to be a reoccurring favourite. In 2011 Christie’s auctioned off Elizabeth Taylor’s eighty-piece collection of jewellery and sold every item, making a combined total of $115 million.