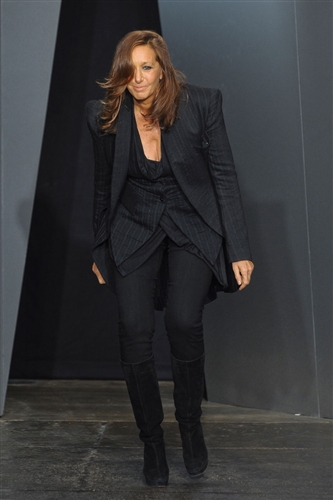 Growing up with her mother, a model, and stepfather, a tailor, Donna Karan studied at the Parsons School of Design after graduating high school. Leaving the school, Karan started her career as an assistant to Anne Klein in 1967. Working her way up, she became head of the Anne Klein design team remaining there until 1984.

In 1985 Karen formed her own company with her late husband Stephan Weiss. Becoming known for her elastic bodies, her Essentials line, a collection of seven key pieces, become so popular the collection now has expanded to around 200 pieces.

In 1988 Karen introduced her DKNY collection, targeted at a younger consumer and lower price range, which began an intense growth for the company. With DKNY so successful, other brands and labels were created from in including DKNY Jeans, DKNY Active, DKNY Underwear, DKNY Jeans Juniors and DKNY Kids.

Seeing a gap for a sophisticated style of dressing for men and under her influence from growing up with a tailor as a father, Karen founded a men’s collection in 1992 and a year later the DKNY Men line was created.

1992 also saw Karen develop a beauty and fragrance line under creative leadership from her husband. In 1994 the first London flagship store was opened and in 1999, the first New York City flagship store opened.

In 1996 the business became a publicly-traded company and five years later was acquired by LVMH.

Throughout Donna Karan’s career she has been acknowledged for her achievements many times. The CFDA have awarded her six times, most recently in 2010 when she was nominated for the Womenswear Designer of the Year Award.

Beginning with the simplicity of a bodysuit, Donna Karan is known for her denims, classic lines for woman’s shapes, cashmere, leather, stretch and moulded fabrics.