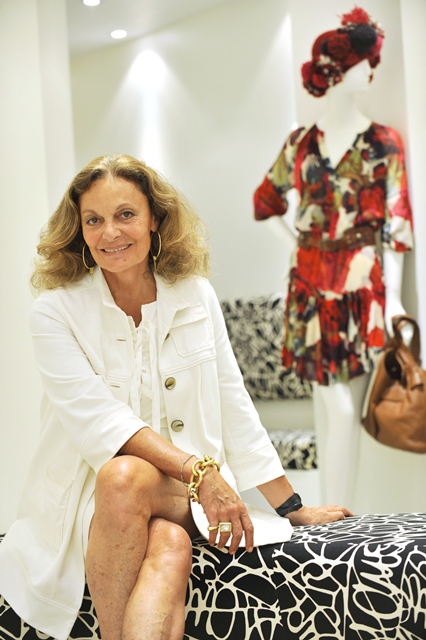 Born to a Greek Jewish mother who survived the holocaust and a Russian-born father, Diane Simone Michelle Halfin grew up in Brussels before moving to boarding school in Switzerland aged 12, then to another in Oxfordshire at 15. She then went on to study Spanish at Madrid University in 1965. A year later she transferred to the University of Geneva to study Economics. It was there she met Prince Eduard Egon von und zu Furstenberg who she married in July 1969. At her wedding she wore a dress she designed herself made by fashion house Dior. The same year Von Furstenberg started an apprenticeship with Angelo Ferretti, designing simple jersey dresses.
Moving to New York, the couple had two children Prince Alexander and Princess Tatiana. With her new aristocratic status, Von Furstenberg was eased into the fashion industry. Encouraged by Dianna Vreeland, she put together a collection of her dresses showing her first designs at the Gotham Hotel.

With her marriage failing, Von Furstenberg was more determined to be financially independent and with help of friend Richard Conrad and financial backing from her father she opened a Seventh Avenue showroom. It was here she designed her iconic wrap dress. With the dress having almost instant success Von Furstenberg moved to Connecticut in 1973. In 1975 15,000 wrap dresses were being produced a week. Worn by Betty Ford, Gloria Steinem and the suburban housewife, the dress became a cultural phenomenon. The same year she separated from the prince and in 1983 eventually divorced him. Expanded her business she added jewellery, furs, sunglasses, shoes, a cosmetic line and in 1975 her first fragrance named after her daughter, Tatiana.

In 1985 she moved to Paris, France to live with Alain Elkann, where she founded publishing house, Salvy. In 1989 she left Elkann and returned to the United States back to Connecticut. In 1991 she released a book ‘Beds’, featuring bedrooms of celebrities and royals, and made a comeback with a new version of her wrap dress. 1993 saw another book ‘The Bath’, featuring celebrity bathrooms.

In 2001 Von Furstenberg married media mogul Barry Diller with whom she’d been romantically involved with on and off since the 1970’s. The following year she became a naturalized U.S citizen. In 2005, she received a lifetime achievement award from the Council of Fashion Designer of America and in 2008 appeared as a judge on episodes of Project Runway. In 2009 Andre Leon Talley curated a retrospective exhibition entitled ‘Diane Von Furstenberg: Journey of a Dress’ at the Manezh in Moscow. 2010 saw her appeared as a guest judge on America’s Next Top Model and in the same year she was awarded a Gold Medal at the annual Queen Sofia Spanish Institute Gold Medal Gala.

One thought on “Diane Von Furstenberg”