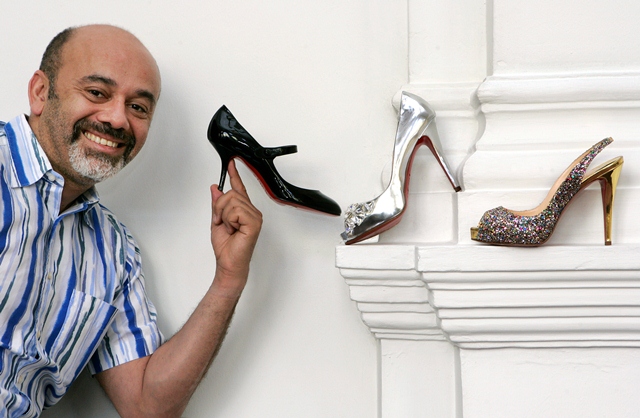 Born and brought up in Paris’s 12th arrondissement, Christian Louboutin would regularly sneak out of school to visit the flea market of Vila do Conde, where all the gypsies loved his shoes. In 1975 on the wall of  the African and Oceanic art Museum, Louboutin was fascinated with a strange drawing of a woman’s shoes with a sharp heel, slashed out with a red line. This started his love of women’s shoes and the ideas behind his later collections.

Between 1980 and 1986 Louboutin worked at the French music hall Foiles Bergeres. Following this he freelanced for Chanel, Yves Saint Laurent and Maud Frizon.

Despite working with prestigious fashion houses, Louboutin turned his attention to garden design in 1989, however, fashion came back to him as in 1992 he created the Christian Louboutin brand and opened his first boutique in Paris. Two years later he opened another in New York City.

In 1995 Louboutin started to design for couture and ready-to-wear lines for Lanvin, Jean Paul Gaultier, Chloé, Azzaro, Givenchy, Viktor & Rolf and Diane Von Furstenberg. Following this a year later he received a FFANY Award from the International Fashion Group.

In 2002 Louboutin collaborated with Yves Saint Laurent at his farewell haute-couture show, creating a shoe for the finale. Marking the only time Saint Laurent had associated his name with another designer; the shoe was called Christian Louboutin for Yves Saint Laurent Haute Couture 1962 – 2002. 2007 saw another collaboration with director David Lynch on the exhibition Fetish, showing sexy, fetish shoes photographer by Lynch.

In 2008 Louboutin received a second FFANY award as well as New York’s Fashion Institute of Technology paying tribute to Louboutin mounting an important retrospective of work.