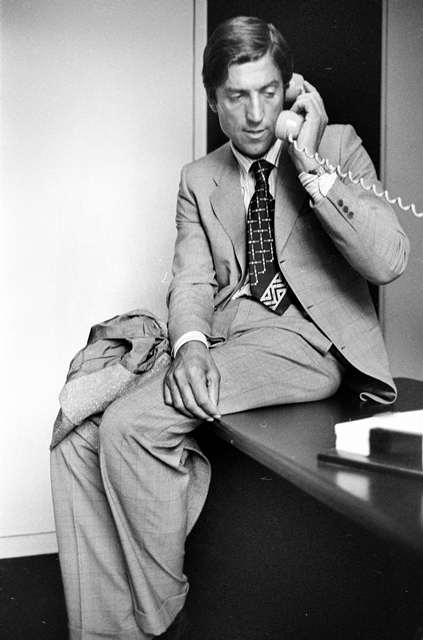 Founded by Stefano, Antonio and Quintino Cerruti in 1881

The Cerruti brothers, Stefano, Antonio and Quintino founded Lanificio Cerruti in 1881. The spinning and weaving factory located between Milan and Turin, offered an area that provided exceptionally pure local water. Aware of the benefits that washing and treating wool in the pure water could give, the brothers decided to exploit its use and establish their business.

Nino Cerruti originally planned to be a journalist, however, Cerruti gave up his dream and studies to take over the family business in 1950, aged only 20.

Cerruti modernised his family weaving workshops and invested in two further factories in Milan, helping him produce his first male collection in 1957. This led to him implementing the prêt-a-porter line into his company.

Cerruti continued to try to modernise the business. With the philosophy that the wearer must be at ease in their clothes, Cerruti developed new finer threads and complicated finishing techniques.

In 1967, Cerruti launched CERRUTI 1881, which coincided with a boutique opening in Paris. The boutique was immediately successful, reputed for the perfection of the cutting and quality of the materials used.

During the seventies the company expanded its international presence starting with Japan and America. In 1976 CERRUTI 1881 launched a female line. Based on the male collection, the style was majestically reinvented to create a racy feminine style.

The house launched Nino CERRUTI pour Homme in 1978, marking the first of a long line of fragrances.

CERRUTI 1881 Sport launched in 1980. Designs for tennis, skiing and running were all made considering a haute couture style. The decade also saw the company start to dress cinematic stars including Jack Nicholson, Clint Eastwood and Harrison Ford. Nino Cerruti was awarded the Cutty Sark Award twice, in 1982 and 1988.

The house continued its expansion into Asia during the 90s. Present in over 30 countries, Cerruti extended their range, adding CERRUTI Jeans in 1995, a younger line for the more fashion conscious.

Cerruti was always inextricably linked with cinema. He has provided clothing for films including ‘Bonnie and Clyde‘ (1967), ‘Wall Street‘ (1987) and ‘Basic Instinct’. For the film ‘Pretty Woman‘ (1990), 100 outfits were provided for Richard Gere. Cerruti’s involvement in cinematic clothing has grown to the extent that a production line in his factory is reserved exclusively for the cinema.

Nino Cerruti retired in 2000 and sold the company to an Italian real estate group during 2000 and 2001. In 2006 Matlin Patterson bought the fashion house. Jean-Paul Knott was named artistic director in 2007, which followed with Florent Perrichon announced as President in 2008.

Nino Cerutti is known for his sartorially exquisite cutting. Luxurious fabrics are used in apparel that is universally recognized for its accuracy.