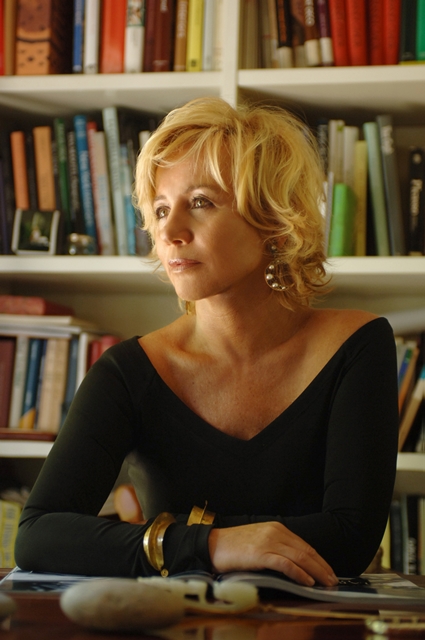 Taught to sew by her mother, Alberta Ferretti could cut fabric by the time she was 12.  At 17, Ferretti decided to leave school and marry. Knowing she wanted a career in fashion, Ferretti obtained  a loan from her parents and with their financial backing, opened her first clothing shop named” Jolly”. By the seventies, the shop was successfully selling the unknown Mariuccia Mandelli, Giorgio Armani and Gianni Versace collections. With sewing skills already learnt at a young age, Ferretti began designing her own clothes. Using her shop as a platform, she started to sell her designs in “Jolly” alongside the Italian designers.

From the encouragement of a sales representative who visited the shop, Ferretti started selling her designs in other boutiques across Italy. With the demand for her clothes growing, Ferretti expanded her business, hiring new staff and moving to a larger location. With the increased capacity of  a new  workshop Ferretti was able to accept other designers’ contracts to produce their clothes.

By 1976, Ferretti’s business was still growing and she went on to found a second company with her brother, Massimo. The business named   Aeffe was launched as a clothing manufacturer and distributor. In 1980, they hired Enrico Coveri to design for the business.

In 1981, Ferretti had her first runway show in Milan. With feminine and modern designs, the collection was praised. At the end of the eighties Ferretti launched Ferretti Jeans Philosophy, which was later renamed Philosophy di Alberta Ferretti. The line was intended for the younger woman at a more affordable price.

In 1988, Ferretti opened her first stand alone store in Soho, exclusively for her Philosophy collection.

By the nineties, Ferretti’s collections were being sold in America with luxury department stores Bergdorf Goodman and Neiman Marcus both selling her designs. Extending her international presence, Ferretti bought a building in New York where she launched Aeffe USA. The Company started distributing clothing for Moschino, Rifat Ozbek, Jean Paul Gaultier and Narcisco Rodriguez.

By 2000, her celebrity cliental had grown. Reinforcing her international appeal, Uma Thurman wore a red Ferretti dress for the Academy Awards, which received critical acclaim.

In 2005, Ferretti released her first couture collection which won ‘The Romantics’ award from the International Fashion Group. The following year two more flagship stores opened in Russia and Saudi Arabia.

Known for her delicate styles, Alberta Ferretti uses draping and tucking techniques to produce clothes that show an appreciation for textiles, embroidery, chiffon and silk fabrics.