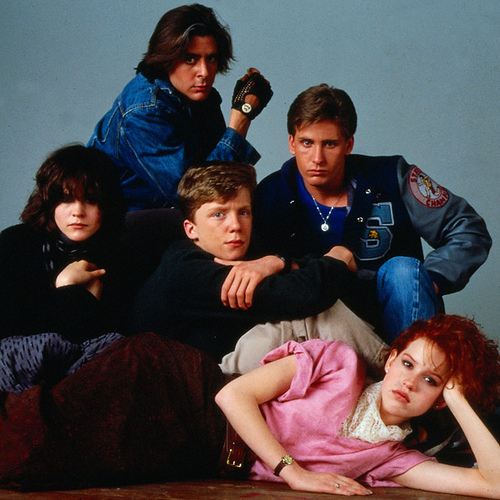 This 1985 film being another of John Hughes’ films (including Sixteen Candles and Pretty in Pink) starring Molly Ringwald, and the first in identifying The Brat Pack, The Breakfast Club plays on the differences between classes and teen styles in the Eighties. Based on a group of 5 students from all different social groups getting stuck in detention together on a Saturday, and having to write a 1000 word essay on who they think are, the film explores the things they have in common as well as shows that the differences that set them apart can be something that brings them together.

A jock and homecoming queen, a rebel, a geek and a non-conformist, who is portrayed as slightly unhinged, show 5 very different styles of fashion born of the 1980s. The grungy rebel sports fingerless leather gloves and a denim waistcoat, flannel t-shirts with a long sleeve vest underneath (which developed into 1990s grunge as well), the jock is in a vest, a letter jacket and high top trainers and the geek in a black jumper and ill-fitting stonewashed jeans.

The girls are also very different, one being slightly grungy as well with an oversized roll neck jumper, maxi skirt and white leg warmers, while the other is dressed in the finest fashion available to 1980s fashionistas, tan leather boots, a brown midi skirt worn with leather suspenders and loose pale pink t-shirt. This iconic fashion can still be championed today with slight tweaks here and there, and we constantly see nods to the eighties on the catwalks of today’s designers.