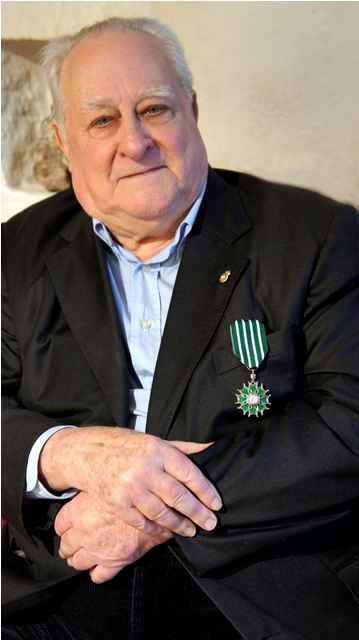 Robert Descharnes was born in January 1926 in Nevers in France and is known for his work as an avant-garde film maker.

He was introduced to Salvador Dali in 1950 by George Matthieu. From then on, they both collaborated, especially when working for the cinema.

In 1954 they worked together on the film “L’aventure prodigieuse de la dentellière et du rhinocéros. » based on Dali’s theories. He also collaborated with him on many publications and projects on and by Dali.

His book “Dali de Gala” is considered as a reference.

By 1980 Dali’s work was more and more threatened by the flood of replicas. Descharnes was appointed by Dali to become head of his firm Demart which he stayed until his retirement in 2004 in order to clean up the market.

He also became a member for life of the Foundation Gala created by Dali and his son Nicholas.

Robert Descharnes is today considered as the main expert on Dali’s work.

On the December 2011 Rober Descharnes has been awarded the “de l’ordre des Arts et Lettres” (Order of Arts and Letters). The designation of Chevalier (Knight) was appointed by Frederique M. Mitterrand, Minister of Culture and Communication