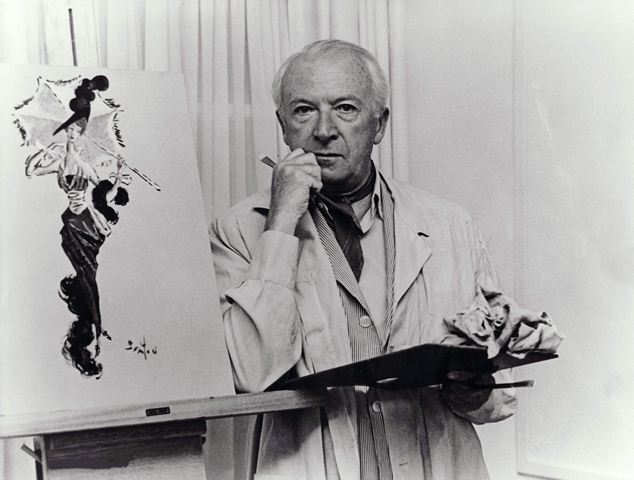 Cecil Beaton was born in January 14, 1904 in London, England. He went at Heath Mount School and at St Cyprian’s School where his artistic talent was quickly recognized.

As Beaton grew up, his nanny decided to teach him the basics of photography on a Kodak 3A Camera as well as how to process negatives. He would often get his mum and sister to pose for him, trying to recreate the portraits of ladies he collected from Sunday newspaper editions.

When he was sufficiently proficient, he sent off his pictures to London Society Magazines, writing under a pen name recommending “the work of Cecil Beaton”. He attended Harrow and despite his little interest in Academia, moved on to St John’s College in Cambridge where he studied History, Art and Architecture. Through his University contacts he managed to get a portrait sitting with the Duchess of Malfi. The resulting images gave Beaton his ever first piece of published work when Vogue Magazine bought and printed the photos.

He left Cambridge without a degree in 1925 and started designing book jackets and costumes for charity matinees, learning at the same time the professional craft of photography at the studio of Paul Tanqueray until Vogue took him on regularly in 1927.

He also set up his own studio. He photographed one of his earliest clients Stephen Tennant who soon became his best friend. Beaton’s photographs of him and his circle are considered as one of the best representations of the Bright Young People of the 1920s and 1930s.

In 1931, he met George Hoyningen Huene and his new friend Horst P, both working for the French edition of Vogue magazine.

The exchange of ideas between this collegial circle of artists across the Channel and the Atlantic gave rise to the look of style and sophistication for which the 1930s are known.

Beaton was never known as a highly skilled technical photographer as he was much more interested in aesthetics. He employed both large formats cameras and smaller Rolleiflex Cameras.

Beaton was best known for his fashion photographs and society portraits. He also photographed the Royal Family for official publications. He for example took the famous pictures of the Duke and Duchess of Windsor wearing an ensemble by fashion designer Mainbocher.

During World War II he was posted to the Ministry of Information and was asked to record images from the home front. Doing so, he captures one of the most enduring images of British suffering during the war.

Beaton had a strong influence on the work of two other important British photographers – Angus Me Bean and David Bailey.

After the war, he made his first steps on the Broadway stage designing sets and costumes for 1946 revival of Lady Windermere’s Fan in which he also acted.

He won the Academy Award for Costume Design for his work for Lerner and Loewe’s My Fair Lady in 1958 and 1964.

Beaton was also a well known diarist. During his life time he wrote 6 volumes of diaries spanning the years 1922-1974.

He was known for his relationships with both men and women – amongst which can be found Greta Garbo, Coral Browne and Viscountess Castlerosse – but the love of his life was art collector Peter Watson, even though they were never actually lovers.

He was made Knight Bachelor in the New Year Honours of 1972.

Two years later, he suffered a stroke that left him with the right side of his body permanently paralysed. From then he learnt how to draw with his left hand, and got his cameras adapted, but he also became worried about his financial security for his old age. In 1976 he started negociating with Philippe Garner, the expert in charge of photography at Sotheby. He acquired Beaton’s archive, excluding the portraits of the Royal Family and the five decades of archive retained by Vogue in London, Paris and New York.