While women pose in their most liberating physical positions, Nikola Tamindzic extracts the animal within orgasmic freedom and female sexuality on the streets of New York City. Fucking New York is an art series of photographs and installations that capture the magnetism of human behaviour beyond the city’s architectural constraints. Limitless and totally relevant. 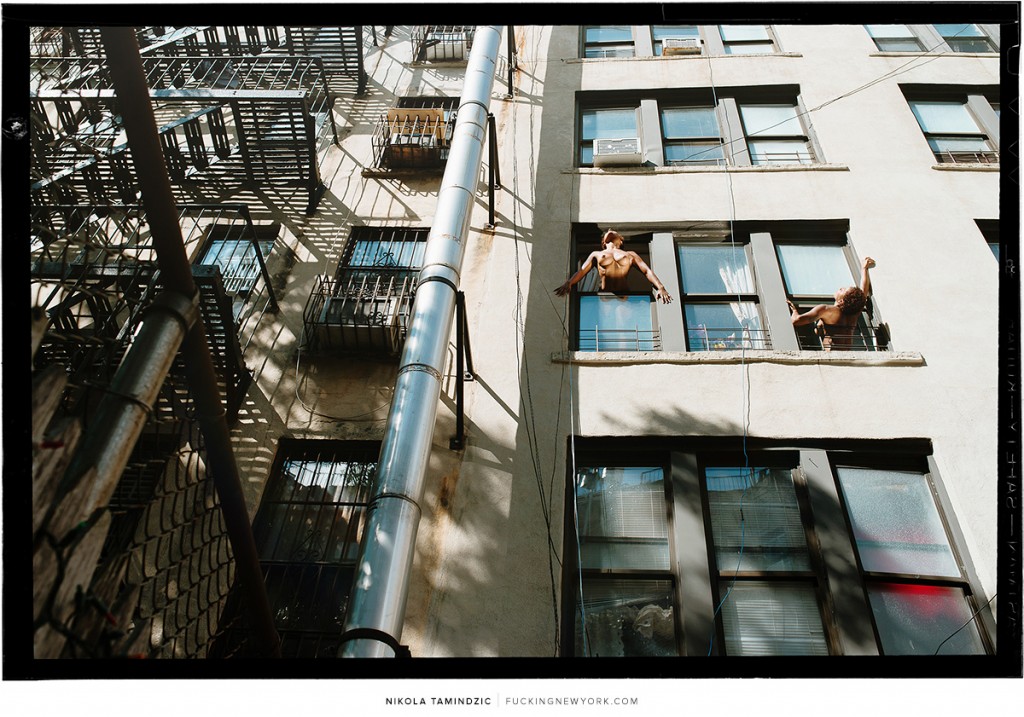 “This project was a culmination of various strands intertwining over time. Something that came together in my subconscious. A love letter to New York.”

Earlier this year the high profile art & fashion photographer gained a huge following with the showcase of Girls Girls Girls, an installation art show featuring the project Fucking New York. He recently announced the global tour of FNY and also released a book last month. This month we got to speak with the artist himself about how it all began. The Serbian native and NYC veteran touches upon his conceptual, technical and personal motivation behind the evolving project.

Early in November on a Wednesday. 10pm in Rome. 4pm in New York. I called Nikola. As he prepared hot tea and I poured red wine the conversation unraveled in a stream of consciousness, fragments and tangents revolving around the building of Fucking New York.

“I am disturbed when my female friends in New York speak of the caustic catcalls and forceful eye contact when in public… and that they are simply used to it. I wondered what it would be what if you could be free to do as you feel… and if nobody cared?” 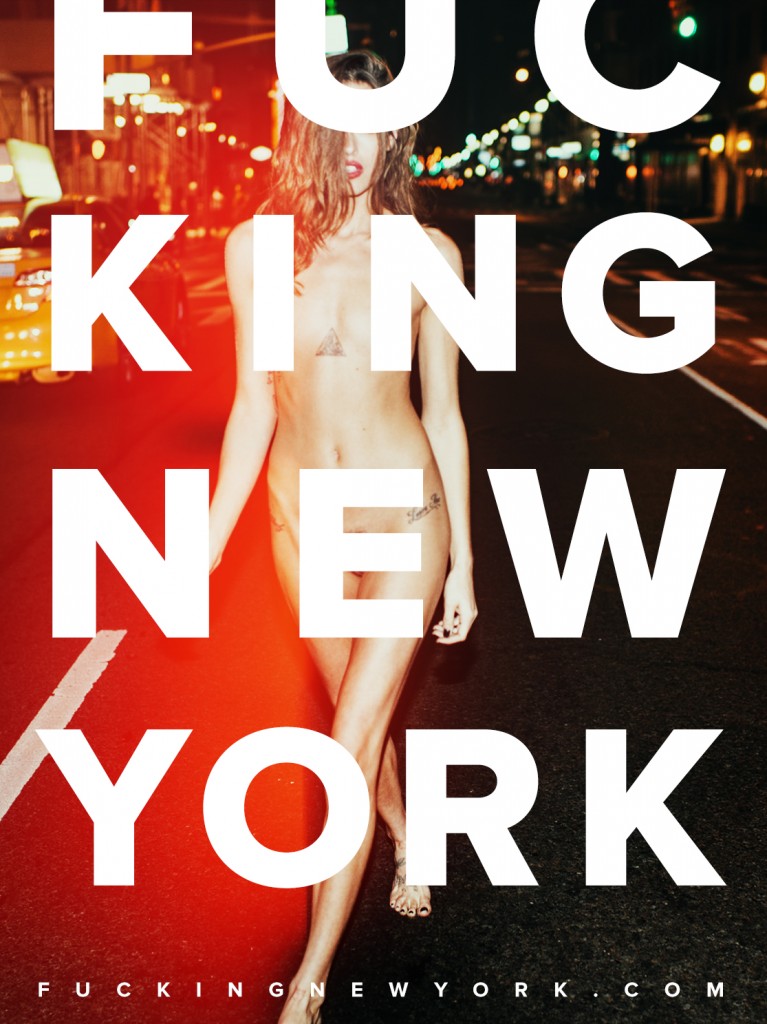 How did this project began, creatively and motivationally? And I want to learn about the technical aspect that went into the look and feel of this collection.

Nikola: There was a reaction against the kind of work involved in fashion photography. I wanted less big production — me, model, one assistant. I wanted to focus on play, not technique, and I wanted to create a situation in which happy accidents occur, as opposed to super streamlined photoshoots with a large crews. Fashion productions are wonderful, but oftentimes the shoot really happens in pre-production.

I knew this project needed to be shot in the streets, with a certain uncanny look. That cliche of New York nudes, ie. plopping glamourous naked women on rooftops with the New York skyline in the background… that whole thing, that couldn’t happen. No easy signifiers of New York, no fire escapes, no brick walls, no rooftops, no skylines.

You almost never see the sky in Fucking New York. With Manhattan in particular, there is a claustrophobia, a feeling of being walled in. This brings about the disparity between the size of the city, and limitations of our own bodies. How does a person fuck a city? How do you wrap your arms — or indeed legs — around a concept?

Before Fucking New York officially started, I noticed a certain commonality to the photos I kept making – photos depicting weird moments where sex and religion overlap — you’re not sure if you’re looking at religious ecstasy or an orgasm. (There’s not much difference anyway.) Mouth open, exhaling, like something is about to be born. There is this goofy line from Sex and the City, “when you live in New York you’re in relationship with New York.” It’s very true. That’s where Fucking New York started — if the city is your most important, most intense relationship when you live here, what would sex with it look like?

It’s a relationship filled with an incredible energy. Good or bad. 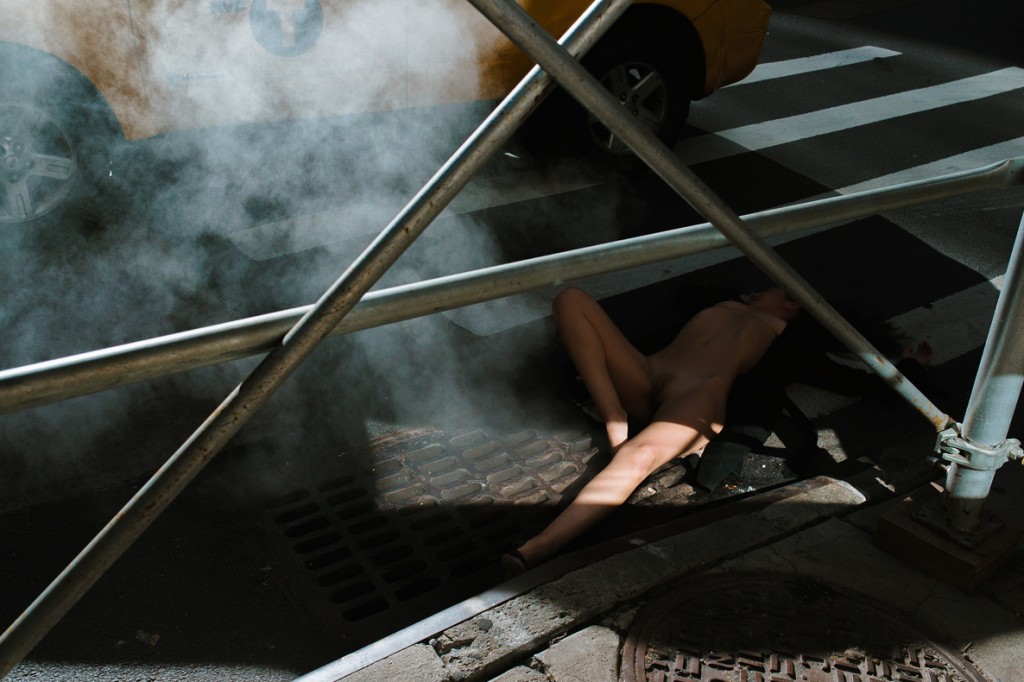 About the role of women. The look you were after, can you elaborate?

Nikola: Women in the series feel alone, have no connection with camera, not posing for observer’s pleasure. The camera shoots from the position of a random person who just happened to be walking by, or looking out their office’s window.

So I chose women who could fall into this story — who could make you feel like you’re witnessing a very private moment that just happens to be unfolding in public, with no spectators, and even if there were other people passing by, they wouldn’t care. Working closely with them, trying to tie in their personal fantasies and preferences was absolutely key — both to help them bring out something real from themselves, and for me to remain surprised. If you know too much about what’s happening you tend to repeat yourself. 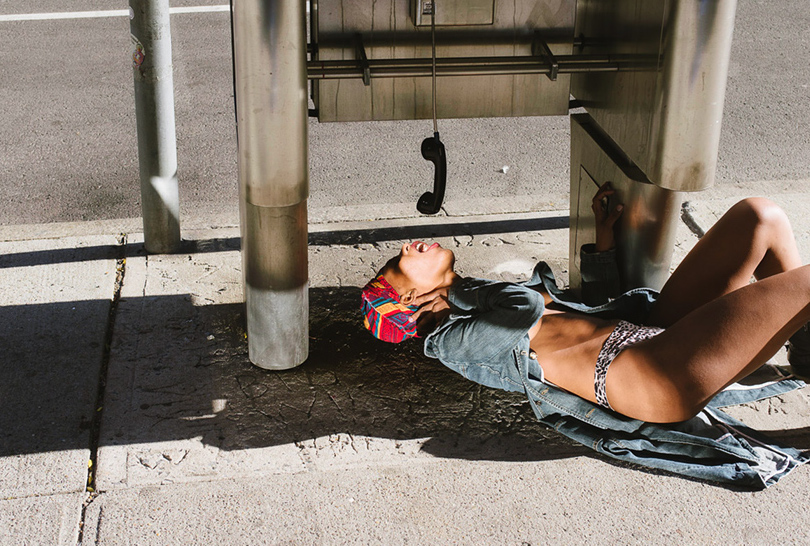 Where did you grow up as a child, and at what age did you embark upon photography? What are some goals you have for yourself and your work at this point in your career?

Nikola: I grew up in Belgrade, lived through the happy ‘70s and ‘80s in Yugoslavia, and the thoroughly awful ‘90s in Serbia. After the NATO bombing of Belgrade in ’99, I decided that all of that was all quite interesting etc. but it may be time to just get the fuck out.

Photography appealed to me from an early age — my dad had a Nikon he took lots of family photos with — and I think there may have been a brief attempt to shoot film in mid ‘90s. But nothing happened until after I moved, and came across a Sony digital camera in an office I worked at — I remember it being a huge contraption that took 3 1/2 inch floppy disks. FLOPPY DISKS! So ancient. But that’s where the door opened — with digital — and there was so much joy to it, same joy millions of people have experienced with their cellphones over the past 10 years.

What is about New York? So many of us can’t put down in words what keeps the pulse of this city so alive, and yet photos seem to captures every time. Would you say it’s one of the most adventurous and rewarding cities to photograph? What other cities in the world do you find compelling to photograph?

Nikola: Fuck if I know. What I mean is, every shot I make of NYC, within Fucking New York or not, is an attempt to crack the mystery.

But yes — there’s an energy that is unlike anywhere else, and that makes it incredibly compelling. Then there’s the deep, deep mythology involved as well — the way NYC presents itself. The way we who live here completely buy into the mythology as well — that each day is a snapshot from a movie, that “if you can make it here, you can make it anywhere”, that all the discomforts of NYC life are worth it — sounds like a dysfunctional romantic relationship with someone you mythologize, doesn’t it? Fucking New York seems like a more sensible idea in this city than it would in many others.

Other cities? They’re different, and it takes time, and actually living there and not just visiting, to find out their angle, past the tourist landmarks. (For example, my feeling is Fucking Paris would involve courtyards rather than streets, and people crawling the walls and ceilings of their apartments.)

New York is the 20th century city (like Paris is the 19th century city) — and I think it would be great to live & create work in a city that’s shaping up to be the 21st century city. Which one would that be? Shanghai, maybe? I’m looking forward to finding out. 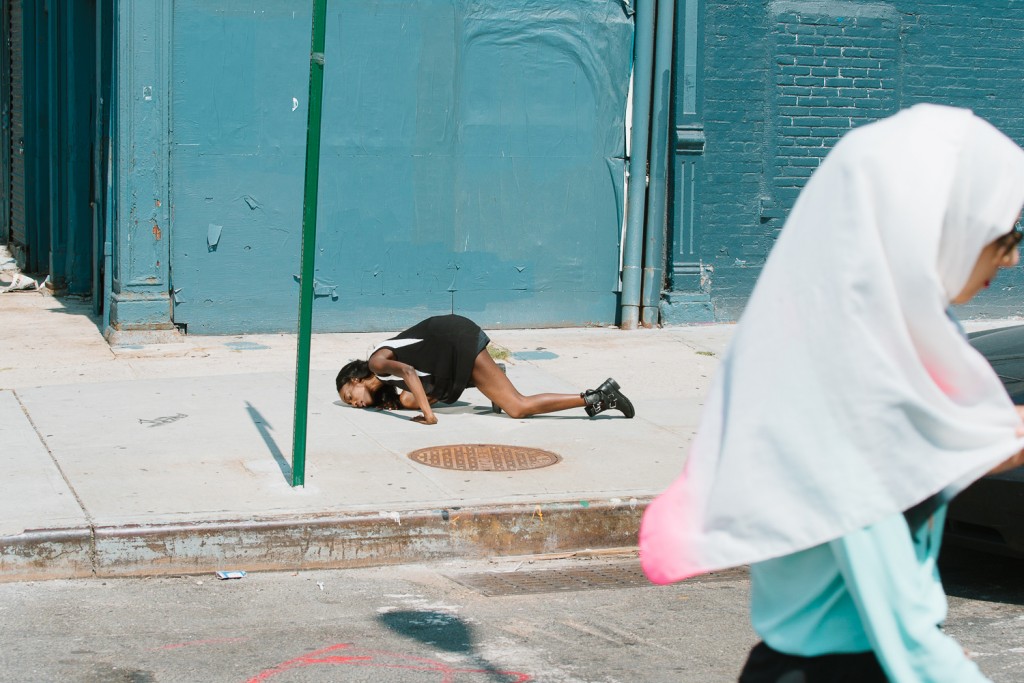 So often our creative momentum can take us into unexpected directions, even tangential. Did you find yourself getting lost throughout this project?

Nikola: If there was anything that had to be kinda shaken out of Fucking New York, it’s in my natural tendency to shoot and frame as if I were shooting fashion. So photos from the first year or so have that wide, architectural, scenic look, with women interacting with the city on a more spiritual level, if you will — responding to the energy of the city. Like a slow, sensual fuck, basically.

Then all the fashion commissions based on Fucking New York came in, and it became clear that some of the these two strands should separate a bit — that that scenic look is more appropriate to fashion, and that Fucking New York should take more of a cue from its title, get rawer, more intense, even surreal, ultimately less bound by notions of good taste. 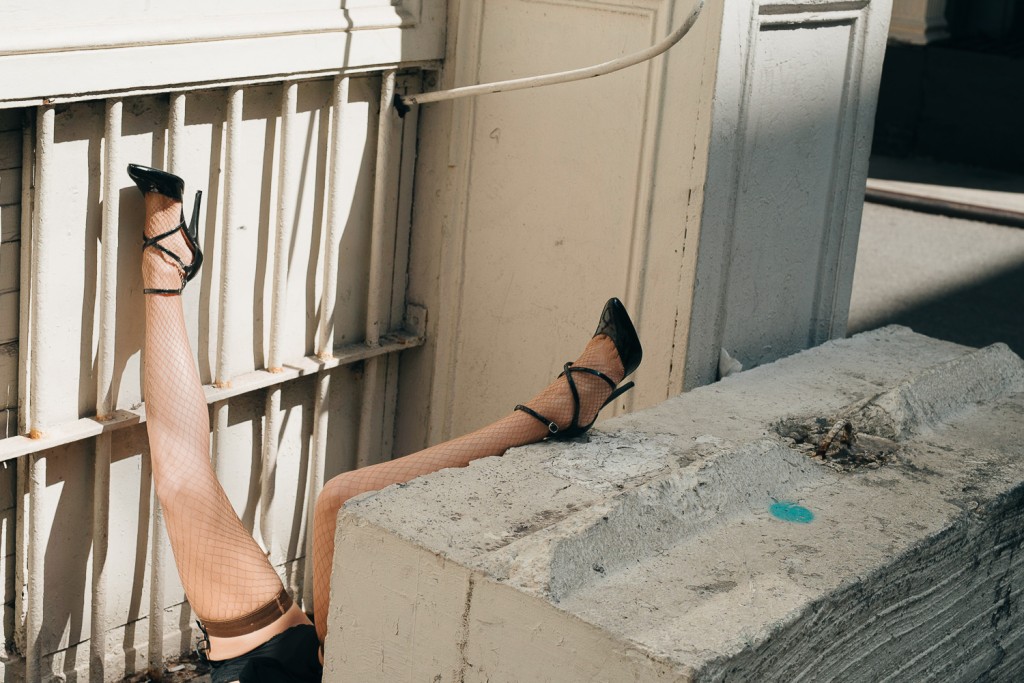 Breasts. An integral part of the concept and women entirely. Was there a particular look you were after? And although the material dodges profanity it reaches for promiscuity and somehow remains shall we say, tasteful? Had you set limits within your shots for this project?

Nikola: Lately I’ve been pushing in a more visceral direction, and no matter the amount of flesh or bodily fluids, the whole thing — to my eyes at least — stays tasteful. Marilyn Minter is a good example — no matter how close she pushes the camera to mouths, tongues and pubic hair, and then coats them in goo, it’s still firmly in the art camp.

The profanity you mention is more in the intent, as far as I’m concerned — who the work is aimed at, and to what purpose.

The women I shoot are truly collaborators — we talk a lot about their own sexuality, their desires, likes and dislikes, and try to incorporate as much of that into each shot — the action is never pushed on them, and there have been a few happy occasions where I had to play catch-up with what the model wanted to do. I think you can tell all this just by looking at the photos, by the level of comfort and abandon on display.

Other than the premise of reacting to the city sexually, and feeling free to do so, we’re not enacting my personal fantasies — what’s happening in the frame comes from women being photographed, and their own sexuality, and that comes across — and that’s ultimately what makes it “tasteful” for me, or more precisely, ethically sound. 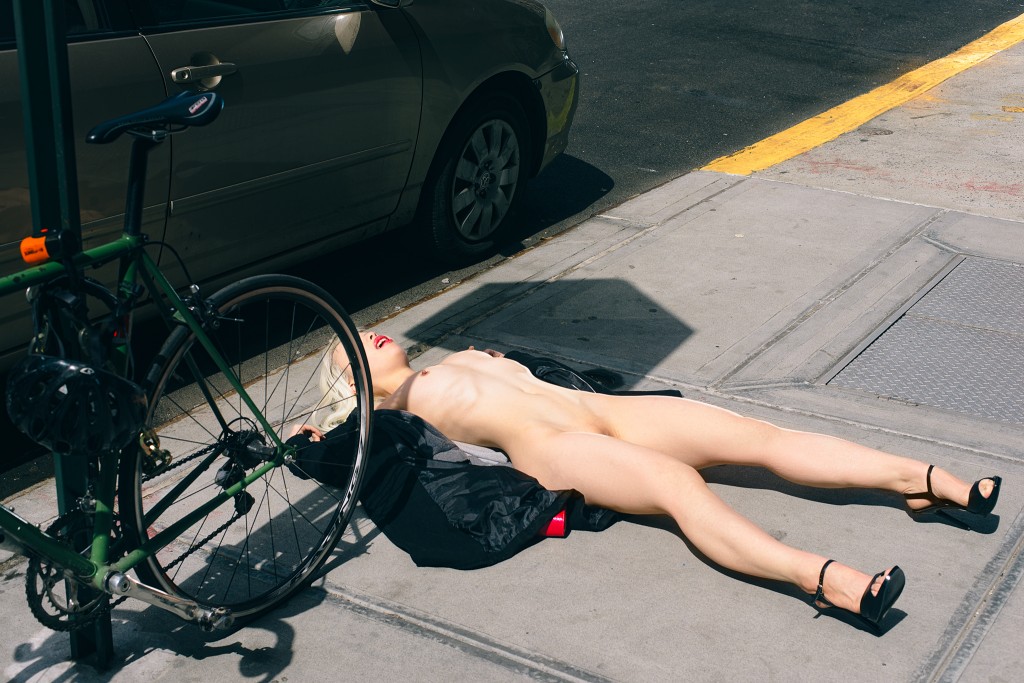 When asked if there was ever a light bulb moment, the shower moment where the idea became clear, Nikola responded:

“The one true shower moment was the name itself: Fucking New York. It was so simple, so straightforward, so fun. I ran out of the shower to check the .com availability for Fucking New York, and also a bunch of other major cities, and everything was taken —  Fucking London, Fucking Paris, Fucking Los Angeles, you name it, but Fucking New York was available — and of course I took that as a sign.” 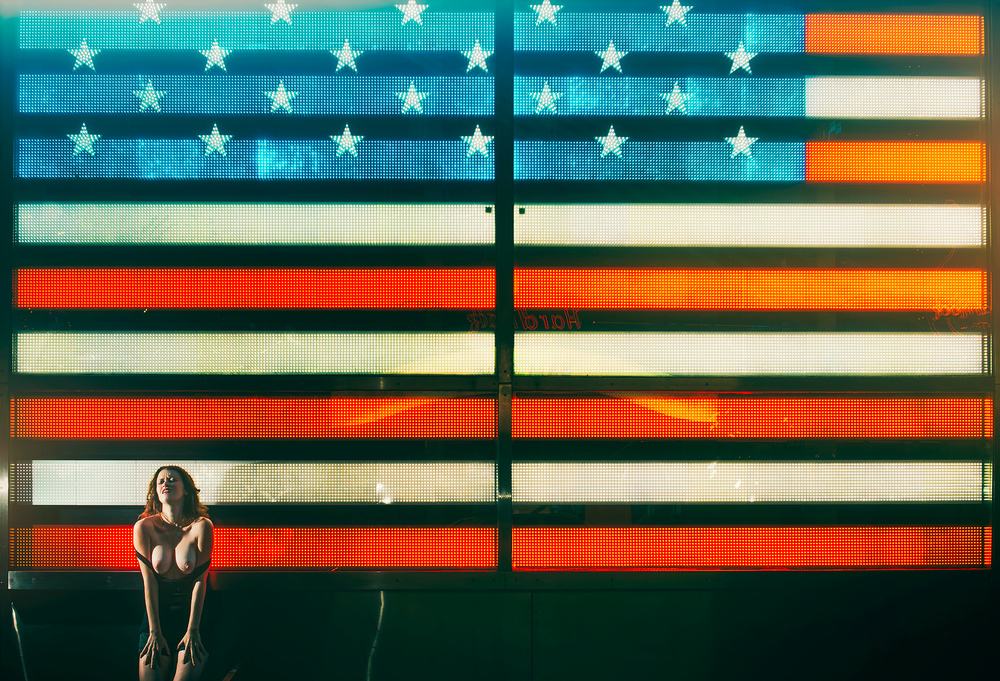 Angela Gleason, graduated in Advertising from San Francisco's Academy of Art University, she rocks the international world on creative fronts as a dedicated slash girl: visual designer / soundsavant / writer / glam lush, for the story beyond the surface. Angela looks after the Catwalk Yourself blog.