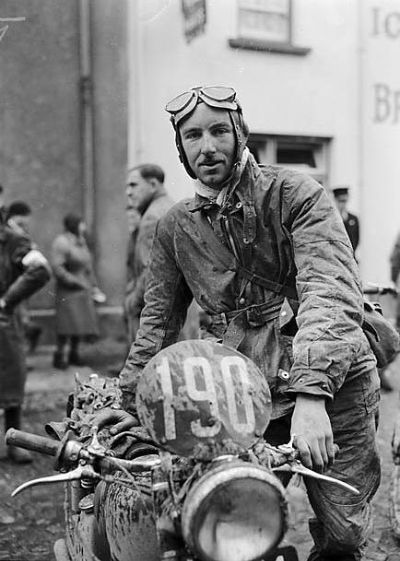 Founded by Harry Grosberg in 1924

Belstaff was established by Harry Grosberg in Stoke-on-Trent, Staffordshire, England. The company produced waterproof garments for both men and women.

Belstaff became the first business in the world to use a waterproof fabric that was breathable now famously called ‘Wax Cotton’. The fabric consisted of fine Egyptian cotton that was treated with natural oils. The new technology was so successful that Belstaff used the material to produce specialist clothing for motorcyclists’ protection.

During the 1930s Belstaff continued to develop specialised materials that were wind-proof, rain-proof and resistant to heavy friction. They used their innovations to expand their product range producing garments for aviators, bikers, the Army and for people pursuing outdoor activities. They also provided the requisite accessories including goggles, gloves, boots, helmets and bags offering their customers total protection and safety.

Belstaff created the famous Black Prince motorcycle jacket in 1943. It was the best selling waterproof jacket of all time with over 40,000 of the jackets produced annually.

The popular Trialmaster jacket was designed in 1947. The waterproof design was chosen by generations of motorcyclists for both competitive races and every day journeys. Wearers included Sammy Miller, Phil Read, Ernesto and Che Guevara.

By 1960 Belstaff was the only garment manufacturer producing high technology jackets in 100% natural fabrics.  During the 1970s the XL500 jacket was designed with a specially developed nylon textile known as Belflex. The material’s wear ability and durability were unsurpassed.

In1990 Belstaff released their ‘Evolution’ range. However, this was accompanied by having to close their original Stoke-on-Trent factory the following year. With the Company seeming to be failing, the demand from loyal clients and technicians encouraged the business to carry on production in a smaller factory producing a smaller quantity of products. Franco Malenotti was appointed as head designer.

More development took place in 1994 with the Nylon fabric ‘Belfresh’ created. An absorbent fabric that allowed perspiration to be eliminated was ideal for hot weather. The following year a new protection system, Beltech, was developed offering top performance in waterproofing, breathability, and protection from the elements.

The Clothing Company was launched in 1996 by Malenotti. Created to increase Belstaff’s position in the market, the result was an immediate increase in sales.

Belstaff developed their first fabric with external metal protection in 1999. Named Ironguard the jacket helped protect against the elements as well as impact. A year later Belstaff introduced the ‘Reacta’ concept, a system able to stabilise temperature in all user conditions.

Belstaff launched into other markets in 2002. A bags and shoes division was set up, which achieved remarkable success.

In 2003 the company collaborated with an Italian textile factory to create safety jackets for Special Forces. The venture led to the creation of the Balistic Fabric. The high performance fabric was an immediate success. This followed with the development of a seam system called Elastoseam. Elasticised inserts allowed the wearer maximum movement. The two new systems led to the Delta Force collection. George Clooney represented the brand in their European campaign in that year.

In 2004 Belstaff was taken over by the Clothing Company. The company also celebrated their 80th anniversary with the launch of a special collection.

Belstaff started to receive attention from America for its apparel. Garments were continually requested for films including Batman Begins, Blade Trinity, Ocean’s Twelve and Tomb Raider 2.

By 2006 Belstaff had expanded into the Far East, Japan, Russia, the US, Australia and South America. Following the global expansion, the first flagship store opened in London.

Known for its constant innovation and development of new technologies, Belstaff remains the premier supplier of traditional waterproof and protective motorcycle wear. With their jackets made in the 50s and 60s keenly sought by collectors and motorcyclists, Belstaff is a truly iconic company.