In a statement on Tuesday, the 81-year-old designer announced that his brand would officially be going fur-free, inaugurating this plan with the autumn/winter 2016 collection. Coco Chanel said of fashion, it ‘has to do with ideas, the way we live, what is happening’, this attitude indeed rings true with Giogrio’s approach, as his close work with Humane Society International and Fur Free Alliance has palpably influenced his stance towards the use of animals in fashion.

In his announcement of the brand’s decision, he stated that ‘technological progress made over the years allows us to have valid alternative at our disposition that render the use of cruel practices unnecessary as regards animals’, claiming that his company was ‘now taking a major step ahead, reflecting our attention to the critical issues of protecting and caring for the environment and animals.’ The Armani group, which includes the labels Giorgio Armani and Emporio Armani, AJ Armani Jeans and homeware brand Armani Casa, is following suit with major designers such as Stella McCartney, Calvin Klein, Hugo Boss, Ralph Lauren and Vivienne Westwood who have already explicitly announced their commitment to being fur-free. 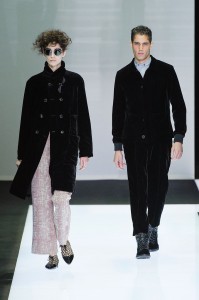 It is fast becoming clear that the view towards the use of animals in the world of fashion is shifting towards the opinion that ‘killing animals for their fur is never fashionable’ (as Human Society International put it) and that designers who continue to use fur ‘are looking increasingly isolated’. Hopefully Armani’s open announcement of this commitment starts a fur-free trend, and after all, aren’t trends what fashion is all about?

Amalia is an English Literature student currently living in London. With a love of all things couture, she always has something to say about the latest fashion, art or film event.