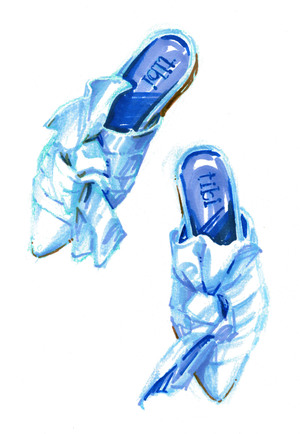 For several hundred years before photography was invented, illustration was the chief method designers and sellers used to promote their fashion to the public. Even before the need to offer customers a vision of what to buy, fashion has been portrayed inadvertently through art since the two have existed. With the ready availability of the camera in the early 20th century, photography quickly overtook illustration as the preeminent media to promote and display fashion, leaving illustration to dwindle to a minor fraction of the world it once ruled.

Recently there has been a rekindling of interest in fashion illustration, both in seeing an artist’s or designer’s sketches, and for designers or brands to use an illustrator’s work to display and market their products. While photography still rules the fashion media, beauty and fashion brands alike are investing in work by various illustrators.

While photography initially drew the age of fashion illustration nearly to a close, it has again allowed for its regrowth. Media platforms such as Instagram, Facebook, Pinterest and Tumblr for example, sites with a strong dependence on photography, have all become galleries for great artists, both emerging and established.

Many artists attribute the rise in interest to the boom in social media, platforms that have allowed for access to their work on an exceptional level, access that would not have been readily available to everyone 20 years ago. “I definitely can see that fashion illustration has become more popular. In the most humble way, I am proud to say that I believe I have contributed to this,” reported Hayden Williams, a renowned British Fashion Illustrator and Designer, “I have been sharing my illustrations online since 2009, just before social media platforms were really popping off. Like Twitter was just getting started and this was before Instagram even existed.

As I put out more of my work, social media became a bigger thing and my following and overall presence grew along with it.” Williams’ social media expertise has led to his work being recognized and praised by several of the celebrities he illustrates, including Beyoncé and Rihanna, and has led to work with Kate Moss for a Rimmel London marketing campaign. 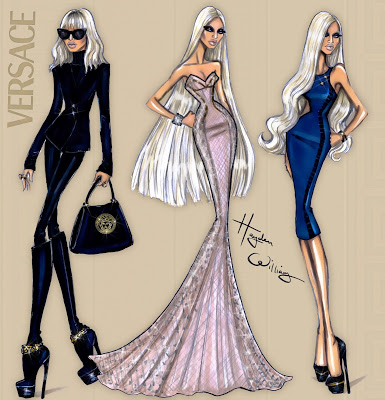 Bil Donovan, an accomplished fashion illustrator and Dior Beauty’s first Artist-in-Residence, offered similar insights, “With [the] advent and proliferation of Social Media i.e. Instagram, Facebook, Pinterest and [Tumblr] to name a few, Fashion illustration began to resurface, then flourish. It is a unique art form, with a spirit and essence not easily defined. In the right hands and communicated through a trained eye it conjures up a world of fantasy and imagination in contrast to the realism captured through the lens of a camera. Ironically, the same technological advances in photography that pushed fashion illustration into the background also brought it to the forefront. Anyone can take a Smartphone photo, use a filter and post it, whereas a fashion illustration is created by hand with an intimacy and personal vision not yet mimicked by technology.” 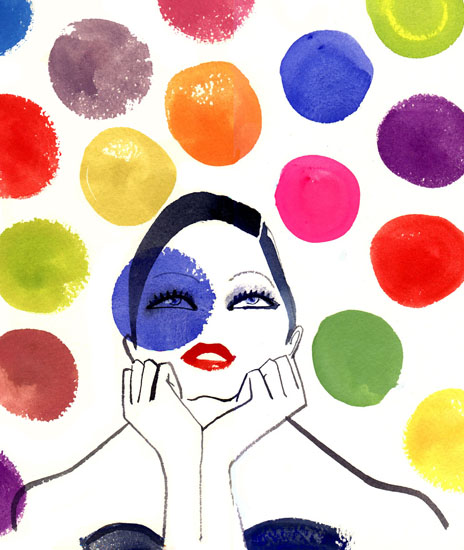 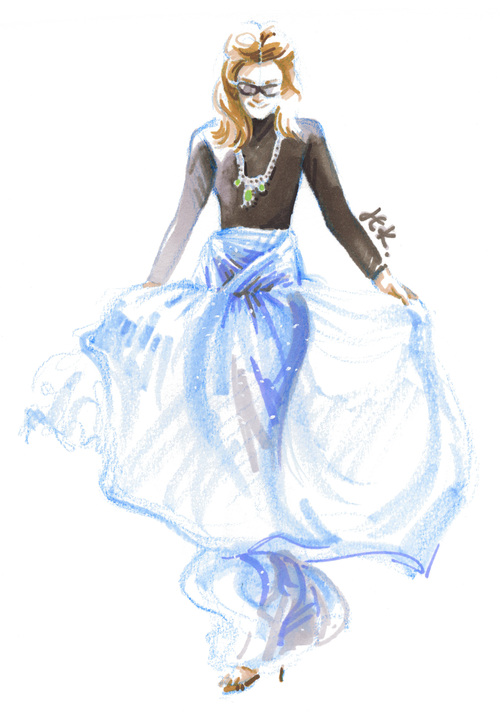 For Bil Donovan, the glamour of Hollywood films drew him in, “…The allure of glamour and beauty visible in old Hollywood films, the movement of Ginger Roger’s gown while dancing with Fred Astaire, Audrey Hepburn in Givenchy Couture, gliding through a ballroom in Sabrina, Marilyn Monroe’s iconic Diamonds Are A Girl’s Best Friend number in Gentlemen Prefer Blondes, Grace Kelly in Rear Window or Natalie Wood in Gypsy. Those moments inspired my imagination and fuelled my desire to recreate the movement, glamour and elegance portrayed on the screen.” 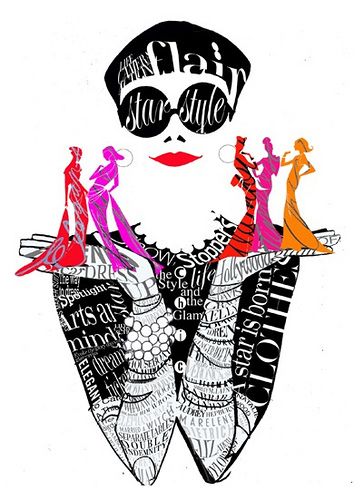 From the beginning fashion illustration has also allowed for great insight into the fashion world, even with the eventual overtake of photography. In the 1920’s and 1930’s, while photography was a growing method of fashion exhibition that was outstripping illustration, it was banned for a time from the couture shows, leaving the illustrators to depict the latest gowns and circulate those images. You can envision the scene even now; a room filled with buyers and artists in study, striving to sketch or remember key details and pieces while fanciful gowns floated through.

Today, the camera phone have taken the place of the sketchpad, but illustrators are still invited to capture the show and offer up a fleeting moment in time through their own unique style and vision. This also allows the artist to gain a very specific viewpoint, one a front-row celebrity or a viewer at home may not be privy to. “I always imagined the fashion industry to be this behemoth of millions of people yet if you pay attention there is only a small amount who are attending shows continuously or working consecutively whilst most of the others seem to chop and change,” observed Scott W. Mason, a talented fashion illustrator and photographer, “There always seems to only be 1 or 2 degrees of separation between most people.

Maybe it’s because I’m based in London so it’s a bit more condensed here but it is crazy the amount of people who know each other.” 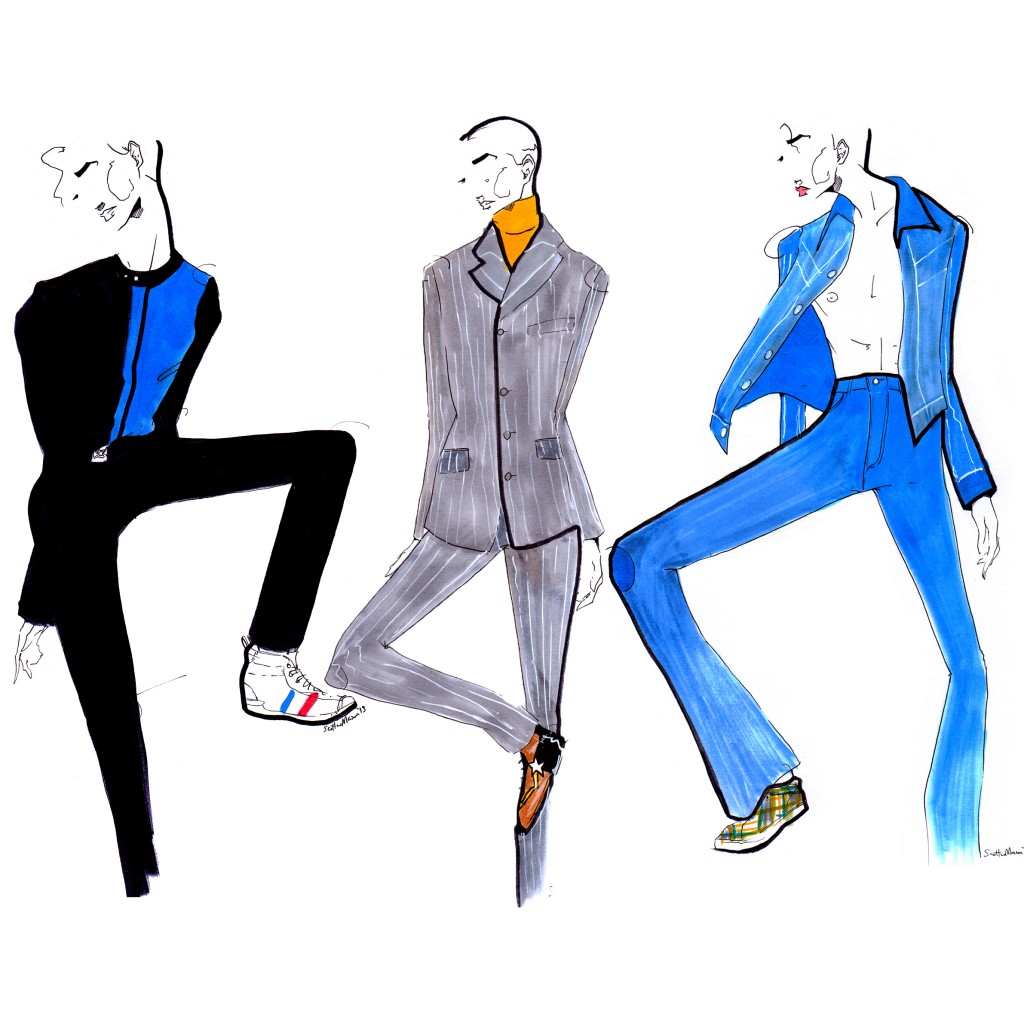 “Fashion Designers are unique artists of the highest caliber working with a 3 dimensional canvas of fabric, shape and form,” stated Mr. Donovan on the subject of the unique insight he has been allowed into the field, “No other creative discipline is as demanding and unforgiving as the world of fashion design. I am in awe of fashion designers and always attempt to pay homage to their vision with my work.” 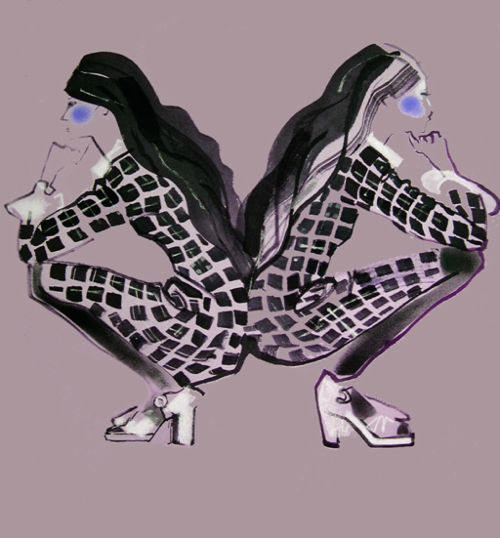 Film stars and fashion designers are not the only inspirations to fashion illustrators. “Music is a huge influence, depending on the track I’m listening to it can completely change the way I’m illustrating and the feel of the image,” said Scott W. Mason, “Other artists are always a continuous influence on me. When I first started, I was in love with the works of Katie Rogers (PaperFashion), Achraf Amiri, David Downton and then I discovered Tony Viramontes, the love of their work rubs off on my work unintentionally, so it’s a continuous and developing thing.” 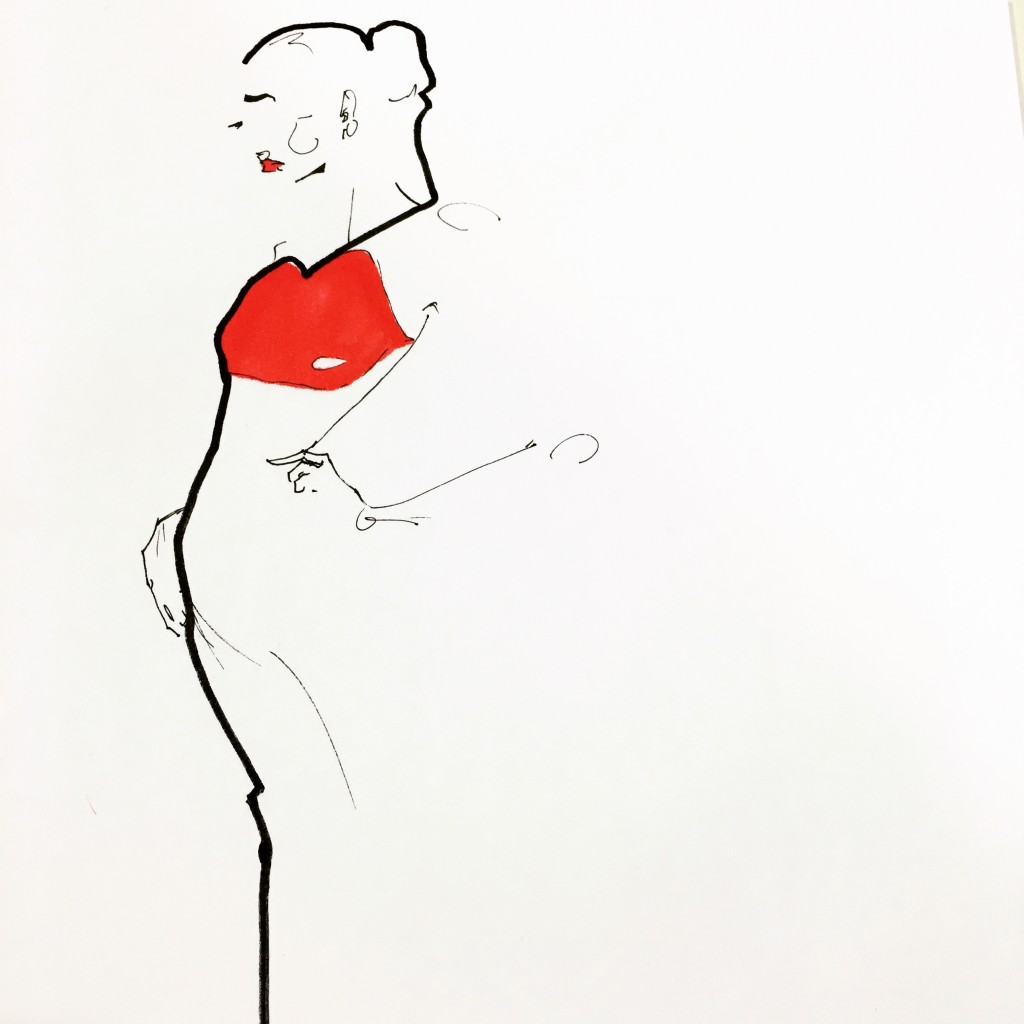 I Dress for Me by Scott W. Mason

“I get a lot of inspiration from pop culture and things that happen in the media, but I also love to reference vintage fashion and merge it with what is relevant for today’s generation,” Hayden Williams commented, “Inspiration can be so random at times, but I am thankful that I am pretty much always feeling creative. My goal in the future is to become a fully realised brand but before that, I want to have many brand partnerships under my belt. I can’t wait to share what projects I have in store. I’m excited to see what 2016 and beyond has to offer!” 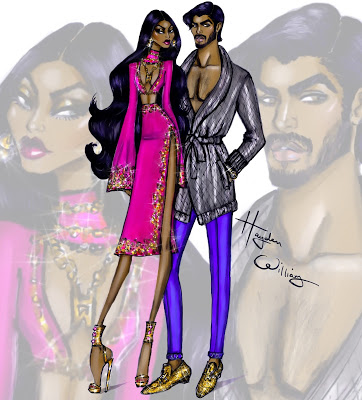 “Branding,” stated Bil Donovan on fashion illustration’s evolution, “Establishing a style and vision and then incorporating that into a brand that can extend beyond the confines of an illustration.” A keen observation, as branding has already become an important part of many illustrator’s work, whether printed onto phone cases, bags or accessories, or as a recognizable feature of another brand.

“I have recently started a print company of limited edition prints of my work and have been solicited to incorporate the artwork onto merchandise” continued Donovan, “A prospect I am very excited about, so stay tuned.”

Hayden Williams, who already has a recognizable brand of illustration through his unique style and social media presence, sees fashion illustration taking a different direction. “Hmm, well I do see fashion illustration becoming more digital, but I’m not sure how I feel about it.” was Williams’ response. “I am a tad old school and have been using my pencil and paper since I was a child. I’m 24 now and I still love using my pencils, so I don’t think I could abandon those materials entirely, but I am open to experimenting and trying new ways of creating.” 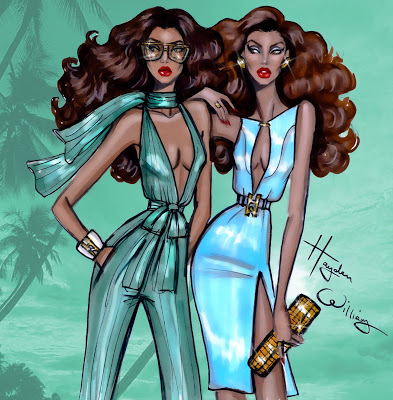 While it has waxed and waned in popularity, fashion illustration appears to be a creative medium that will continue to accompany fashion. A quick search through any social media platform will confirm this. As many artists as there are presenting their own work, there are just as many individuals dedicated to showcasing work from various different artists, proving a widespread and maintaining fascination with the art form itself. 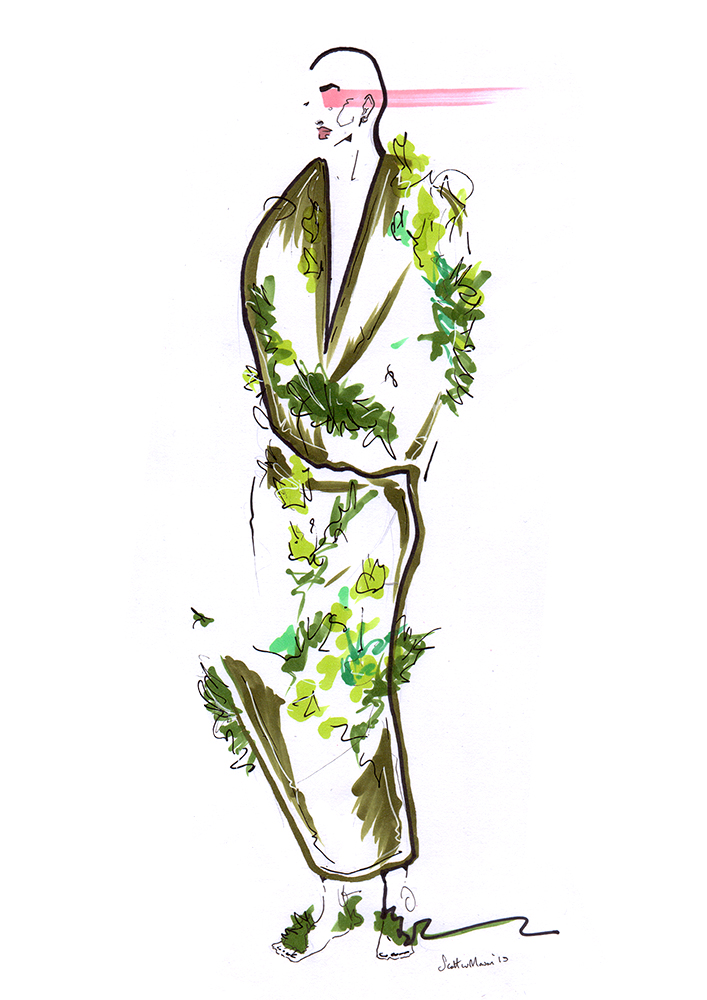 For more work by these artists, please see their links below: