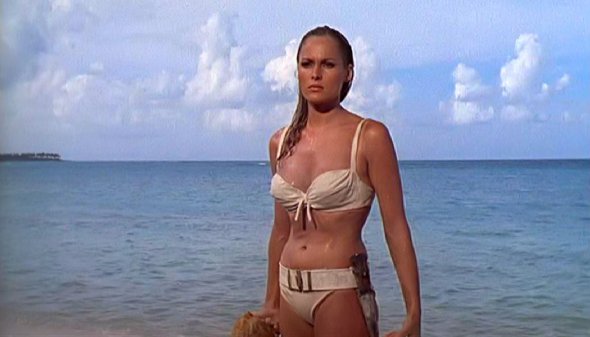 The first of all Bond films gave rise to the most iconic,and certainly the one everyone refers back to when thinking of the classic Bond Girl.

After the success and popularity of the white bikini shown in Brigitte Bardot’s And God Created Women, Usula Andress catapulted the two piece into the bestseller list worldwide when she “not only sent sales of two-piece swimwear skyrocketing, it also made Andress an international celebrity”. – Stephanie Pedersen, Bra: A thousand years of style, support and seduction. Andress herself admitted that the “bikini made me into a success.

As a result of starring in Dr. No as the first Bond girl I was given the freedom to take my pick of future roles and to become financially independent”. This film had “the biggest impact on the history of the bikini” which was a design by Andress herself and Dr. No’s costume designer Tessa Prendergast, and was sold by Ursula at a Christie’s auction for £41,000 to Robert Earl of Planet Hollywood.