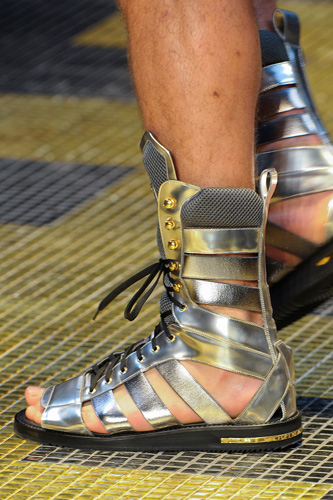 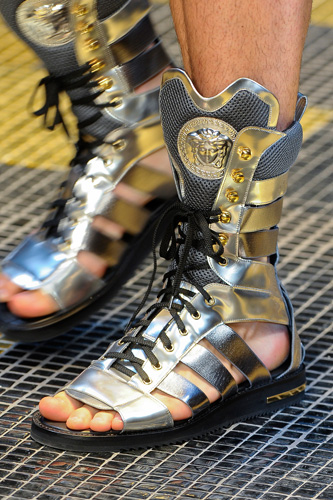 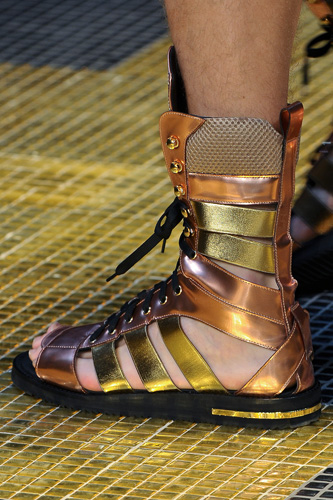 Gladiator Sandals are a flat sandal with several wide cross straps holding the sole to the foot, with one wide strap around the ankle. These shoes have existed since ancient times when Roman and Greek gladiators worn them through battle. Although no Roman citizen would appear in public with bare feet as this would indicate poverty, sandals are believed to be the first rigid shoes crafted. A stiff sole was attached to the foot by leather cords, straps or braided thongs. Gladiator Sandals were the most worn type of footwear in warm climates such as the countries surrounding the Mediterranean and the Roman Empire.

Gladiator Sandals were worn in the arenas of Ancient Rome. It was not strictly necessary for gladiator sandals to be studded with hobnails. It was however, traditional for many gladiators to wear the armour, clothes and weapons which came from their ethnic backgrounds to battle in. The Ancient Romans were experts in the process of tanning and produced both supple leather which was ideal for making gladiator sandals and tough leather which was used to make protective armour. They also used animal such as a deer or cattle. The thickest and most durable types of leather were used for making the soles of gladiator sandals and the remaining softer leather was used for making the straps.

Even though these sandals have existed since ancient times it seems that they have not been in the fashion scene until the last century since the film industry has produced films about ancient Romans. These films have all shown gladiator sandals being worn and seemed to have had reinvented the fashion side of it and they are now a major fashion item for any women’s wardrobe. Versace shown some gladiator sandals in theirs Man spring/summer 13 collection.

One thought on “Gladiator Sandals”