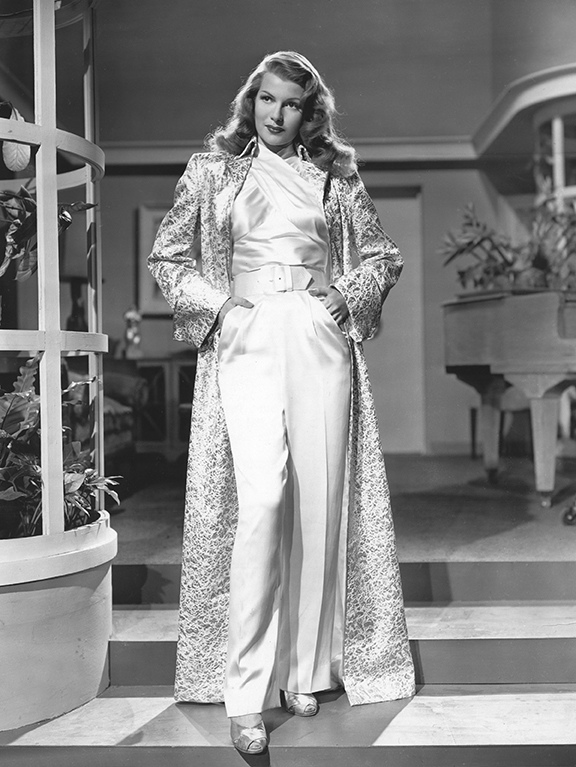 Rita Hayworth was born Margarita Carmen Cansino on October 17th 1918. The star was born into a family of dancers, and took lessons from a young age. In 1926 she was featured in Warner Bros.’ short film, La Fiesta. The following year, Rita moved to Hollywood with her family in hopes of breaking into the business as dancers. When the Great Depression took it’s toll and interest in movie musicals lessened, Rita and her father formed “The Dancing Cansinos” and performed at the Caliente Club. It was there that Winfield Sheehan, the head of Fox Films, approached Rita. Following a successful screen test, the actress was signed under the name Rita Cansino.

In the early stages of her career, the star was often typecast as an exotic foreigner due to her Mediterranean looks. Rita took her first starring role in Human Cargo (1936). In order to grant the actress a wider range of roles, Rita dyed her hair a dark red and used her mother’s maiden name Hayworth, changing her image to that of a classic American beauty.

The actress cemented her role as a screen siren, wearing a sultry white halter gown with a sweetheart neckline in Blood and Sand (1941).

Hayworth was the first actress to be partnered with both Fred Astaire and Gene Kelly. In 1941 she starred alongside Astaire in ‘You’ll Never Get Rich’ stunning audiences as she twirled in a black gown with the layers of tulle and chiffon slashed to the thigh. ‘You Were Never Lovelier’ (1942) saw Astaire and Hayworth partnered again, with costume designs by Irene. Hayworth’s gowns were an exercise in illusions, with flesh coloured mesh embellished with suggestively place beading, lace and sequins. Travis Banton created the showgirl costumes, forties skirt suits and stunning gowns, with a playful use of colour in Cover Girl (1944), starring Gene Kelly.

Jean Louis dressed the actress in the critically acclaimed film noir, ‘Gilda‘ (1946). The designer created a rumoured $60,000 wardrobe for the film, including a black satin dress worn with long gloves, and a long-sleeved crop shirt and matching wrap skirt, adorned with sequin flowers.

For ‘The Lady From Shanghai’ (1947), Jean Louis created a monochromatic wardrobe for the actress, to match the film noir’s dark cinematography. Hayworth caused controversy when she famously cut her auburn locks and dyed them platinum blonde for the role. Audiences and critics failed to embrace the film, and Rita took a hiatus from the big screen. Her comeback performance in ‘Affair in Trinidad’ (1952) was a great success, outperforming Gilda in the box-office. Hayworth wore a glittering black evening gown with a plunging neckline for the film’s final scene. This, along with Jean Louis’ other stunning creations earned an Oscar nomination for Best Costume Design.