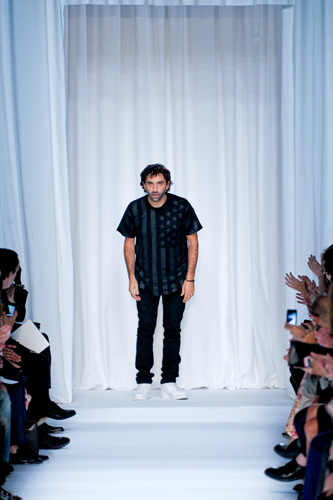 Born in Italy, Ricardo Tisci grew up with his eight sisters. Aged 17, Tisci moved to London to attend Central Saint Martins College of Art and Design. After graduating in 1999, Tisci returned to Italy and started working for a number of companies including Puma, Missoni, Justin Oh and Coccapani. Tisci then embarked on a three year contract with Ruffo Research – a business that collaborated with young designers.

In 2004, once Tisci’s contract was over, he started to develop his own collection. Tisci showed his designs in Milan Fashion Week autumn/winter 05/06 the following year. Shortly after Tisci showcased his work, he was offered the Creative Director role at Givenchy.

Wanting to focus on his own designs and label, Tisci was initially unsure whether to accept the position. But after financial problems for his family, Tisci accepted Givenchy’s offer. On February 28th, 2005, Ricardo Tisci became Creative Director of the Haute Couture, ready-to-wear and accessories lines at Givenchy following in the footsteps of John Galliano, Alexander McQueen and replacing Julien Macdonald.

Tisci saw success at Givenchy, especially with haute couture line, raising their customer base from five to 29.

In 2008, Tisci designed Madonna’s costumes for her ‘Sticky & Sweet Tour’ under the Givenchy label. The same year Tisci was asked to curate an issue of A magazine.

Tisci caused a stir in 2010, when he cast the first transgender model to appear in a catwalk show. The Brazilian transsexual named Lea T had worked with Tisci for years, previously his personal assistant. Tisci commented to WWD; ‘she’s always been very feminine: super-fragile, very aristocratic. She’s part of the family’.

Known for revitalizing the Givenchy brand, Ricardo Tisci’s style is romantic with a dark aesthetic. After speculation he would leave Givenchy for Dior, Tisci remains with Givenchy and his modern, religion inspired, romanticised designs.