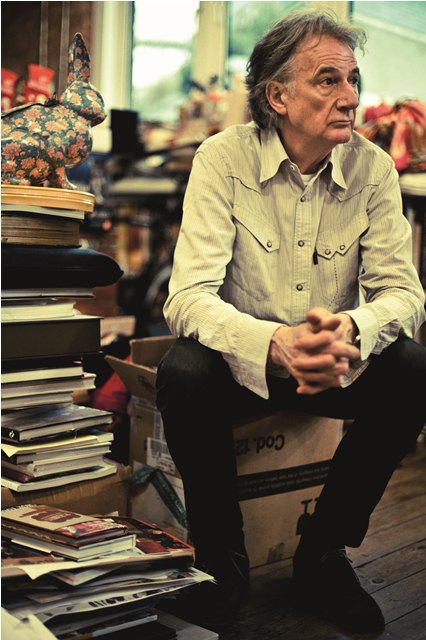 Paul Smith originally had no interest in fashion. With no plans or qualifications, he was forced into taking a tedious job at a clothing warehouse in Nottingham. Smith’s passion was cycling. With an ambition to become a professional racing cyclist, his dream was shattered when he had a terrible cycling accident aged 17.

Spending six months in hospital, Smith made new acquaintances during his rehabilitation. Continuing these friendships outside of the hospital, Smith would meet them at a pub that was popular with students from a local art college. Conversations about Andy Warhol, Mondrian and David Bailey were accompanied by the sounds of the Rolling Stones. Smith then decided he wanted to be part of this exciting new world.

Smith started managing a boutique in Nottingham and, with the encouragement of his girlfriend with a small amount of savings opened his first shop in 1970. Only opening on Fridays and Saturdays, he sold his own work as well as those of other designers.

Smith started to take tailoring classes and, with his new skills, started to properly design. He presented his first Paul Smith collection in Paris in 1976, launching his label.

Three years later Smith opened his first London shop in Covent Garden. His popularity and success continued to grow resulting in him introducing a womenswear label in 1994.

Smith collaborated with Cappellini in 2002 to create a collection of furniture. The following year Smith designed an upholstery textile in collaboration with Maharam, entitled ‘Bespoke’. The textile was inspired by pinstripe suiting, which was becoming a classic look for the Paul Smith brand.

With over 12 different collections, the Paul Smith brand offers clothing, accessories, shoes, fragrance and furniture for both men and women. With production kept primarily in England and Italy, the fabrics used are mainly of French, Italian or British origin, highlighting Smith’s emphasis on luxury. The business operates in over 35 countries and has 14 shops alone in England with over two hundred branches throughout Japan.

An icon brand in Japan, Paul Smith brand has the essential elements required for a successful company. Consistent high quality, intelligent marketing, humour and a recognizable signature style all make up the Paul Smith business.