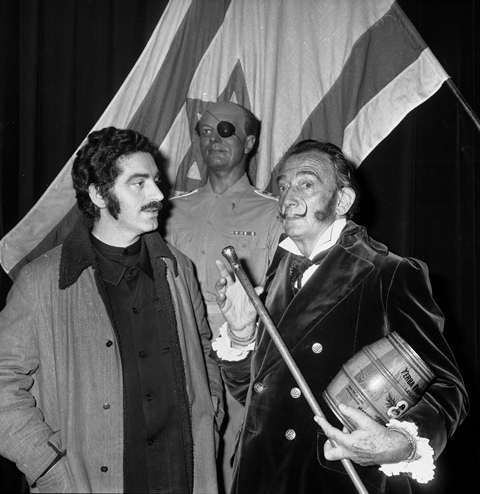 Named at birth Francisco Rabaneda y Cuervo, Paco Rabanne’s mother, a head seamstress at Balenciaga, fled from the Spanish Civil War with her son in 1939 to France where he was given his new name.

In 1966 Rabanne released his first collection entitled ‘12 Unwearable Dresses in Contemporary Materials’. Embellished with rhodoid, sequins and plaques the collection marked the beginning of Rabanne’s view of design as experimentation using unusual materials.

During the sixties Rabanne’s oversized earrings, sunglasses made of fur and other accessories became a huge media and commercial success. His material of choice, rhodoid, could create infinite combinations of colours and form which mirrored the effects produced by Op Art.

Desiring to make his fashion more accessible, Rabanne launched a series of paper dresses in 1967. The soft, lightweight fabric was a cheaper alternative which Rabanne used with coloured adhesive tape to bind it together.

In 1969 Rabanne introduced fragrances to his company. This marked the beginning of the label revolutionising the perfume industry and becoming a long lasting success in the market.

Rabanne continued to work with unusual materials for his trimmings and fabrics. 1968 saw a beaten metal aluminium jersey and 1970 saw dresses made out of linked buttons. In 1972 Rabanne used ostrich feathers attached with Velcro. 1982 saw dresses made with glass reflectors and in 1984 Rabanne used chainmail.

In 1999 Rabanne retired from the Fashion business.  In 2010 he was made an Officer of the Legion d’Honneur by the French culture minister.

Paco Rabanne created clothing that was seen as pieces of art work. Unusual fabrics, hammered metal, knitted fur, aluminium jersey, paper, fluorescent leather and fibre glass have all been used in his creations.  Named the ‘metal worker’, Rabanne’s aversion to needle and thread epitomises his provocative re-evaluation of style.