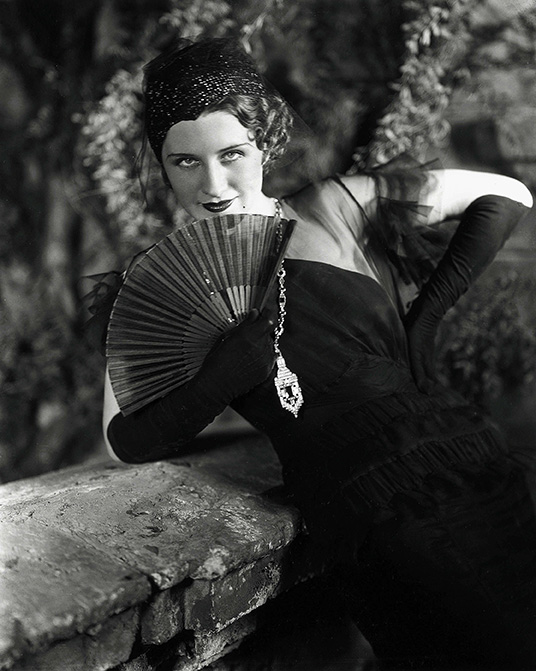 Norma Shearer was born on August 10th 1902, under the name Edith Norma Shearer. The Canadian actress discovered her love for acting after seeing a vaudeville show for her ninth birthday. After a failed start at gaining a part in the chorus line of the Ziegfeld follies, Shearer began her acting career as an extra for Universal Pictures. After several extra parts and a brief stint as a model, Shearer got the fourth billing in The Stealers(1921). The actress also starred in MGM’s first official production, He Who Gets Slapped (1924), which paved her way for becoming one of MGM’s biggest box office draws.

In 1929, the star’s first talkie, The Trial of Mary Dugan, was met with great box office success, solidifying her rise to stardom with her “girl next door” image. Skirted suits with peter pan collars and polka dotted dresses combined to create her good girl look, with feminine ruffles, bow details and puffball sleeves for added sweetness, accessorized with little hats and brooches.

Though her image was successful, Norma was wary of keeping the public’s interest. She reworked her image, with the help of portrait artist George Hurrell, to be more sensual and sophisticated in an attempt to remain popular. She also wanted to convince her husband and MGM producer, Irving Thalberg, that she could play the racy lead in The Divorcee (1930). The role earned Norma an Oscar for Best Actress, which she followed with a string of box office hits including Strangers May Kiss (1931), A Free Soul (1931) and Rip Tide (1934). As one of the studio’s most successful stars and “the reigning queen of sophisticated, flirtatious elegance,” Norma Shearer was outfitted by one of Hollywood’s foremost costume designers, Adrian. The actress wore many of his custom-made slinky bias cut silk and satin gowns, the popular style of the day, trimmed in fur cuffs and jewels.

Following a rise in censorship, Shearer began to focus on period dramas and noble prestige roles in Romeo and Juliet (1936), Marie Antoinette (1938) and The Women (1939). Marion Davis later said that Shearer attended a party in one of her extravagant, highly decorative Marie Antoinette costumes, requiring the door to be removed so she could enter the room and four chairs to accommodate the elaborate skirt, so she could sit at the table.

The actress retired in 1942, after completing a role in Her Cardboard Lover.