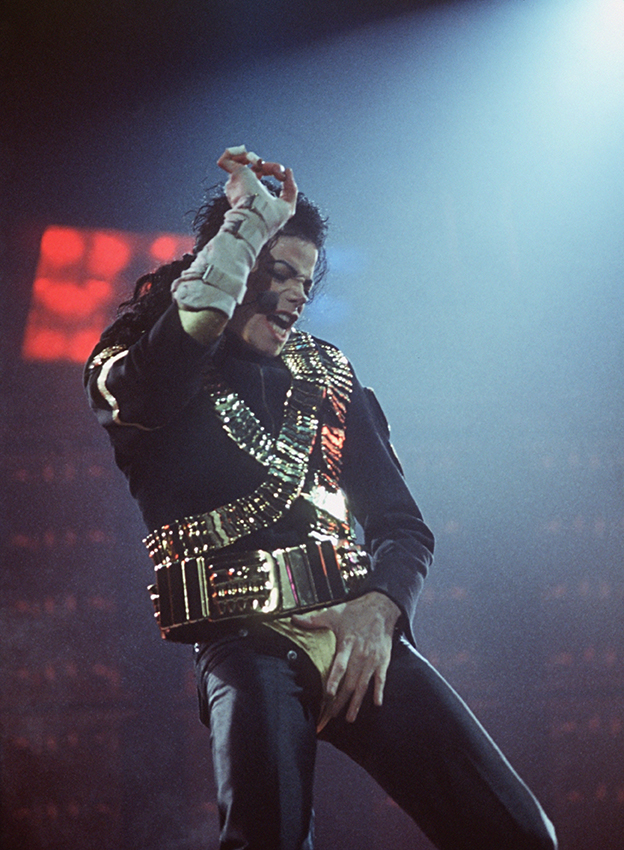 For over 20 years, Michael Jackson reigned as the electric, highly fuelled music icon that inspired and brought entertainment to music lovers all over the world. The ‘King of Pop’, his influence over the music and fashion industry created a storm which would be the basis for future acts.

Born on the 29th of August, 1958, Michael was the eighth out of ten children and spent his early years in the 3 bedroom house in Gary, Indiana. The Jackson clan were never meant to lead ordinary lives, and soon the Jackson brothers became an international hit, starting off playing in clubs in the early 70‘s and by 1975, on the world stage performing hits like, ‘ABC’ and ‘I’ll Be There’. Bell bottoms, loud prints and matching 3 piece suits became the look for the rising stars, playing on current fashion whilst giving it a cheerful edge. Michael soon became the leader of the group and out-shined his brothers, eventually leading to a solo career by the pushing of Quincy Jones whom he had worked with on the soundtrack to ‘The Wiz’, a starring role for Michael along with good friend Dianna Ross as Dorothy.

In 1980 Jackson released his first album, ‘Off The Wall’, and became an instant success with hits like, ‘Don’t Stop Till You Get Enough’ and ‘Rock with You’. Michael soon became the first black artist to appear on MTV, a milestone in its self for music culture and opened Michael up to a new wave of audiences. Nothing however could prepare the world or Michael for the success of his 1982 album, ‘Thriller’.

‘Thriller’ set Michael to new heights never seen before by a solo artist, and became the hit album of 1983 and continues to this day to sell with over 100 million units sold also being called the most successful album of all time. The titled song, ‘Thriller’ reached cult status and the accompanying video, became the first music video to be presented in a movie-like way and the most successful video of all time. This presentation of his art began Michael’s leadership in music performance, not just at his sold out shows but in his music videos as well, the most successful spanning around nine minutes.

The king of pop only rose with more albums such as: ‘Bad’ (1987), ‘Dangerous’ (1991), ‘HIStory: Past, Present and Future, Book I’, ‘Blood on the Dance Floor: ‘HIStory in the Mix and ‘Invincible’. Each album gained enormous success proving that Michael Jackson’s star power was infinite.

In regards to his fashion, the point can be made that they were an extension of his art. They were designed to bedazzle, shine and draw attention to him when dancing onstage. They were costumes, but they became for the young population at the time a style, that signified rebellion and artistic expression. Pegged pants, heavy leather, white socks and an attitude; Michael’s style reflected a man as a leader in music and fashion. Staple items from many of Michael’s evolutions that have become pop culture history include his ‘Beat It’ red leather zipped biker jacket to his vamped up, The Warrior’s styled setting for ‘Bad’, directed by Martin Scorsese.

His costume designer, Michael Bush, created some of the most iconic outfits that Michael Jackson wore over the most renowned years of his career. This included his Swarovski jewelled glove that he wore as an extension of his performances, often shooting out his hand and dipping his head whilst under a spotlight. On his Dangerous Tour, Michael wore a gold bodysuit, with the left side flapped open, a personification of jester royalty.

In his Bad Tour, the most acclaimed and successful tour which played 123 sold out shows to over 4.4 million fans showed Michael in a rebellious attire, with attention to detail especially in a chrome body suit which was noted for being highly structured in basis, but appeared deconstructed with the accessories that Michael included in nearly all aspects of his tour attire.

His overall look during the late 80’s and early 90’s cemented his ‘King of Pop’ title with enthralling royalty aspects in European inspired military suits. Either a colourful combination or a dark and stern ensemble; never shy of the glitter which was an influence of his favourite Disney character, Tinker Bell.

Outside of his shows, he wore similar get ups, but with a more relaxed, oversized appeal, as recognised in his Motown 25 performance in 1983, with the glove intact, showed him wearing a suit, which was tailored above the ankle, with white socks pulled high up stunning the audience with his signature moonwalk which caused a youth riot with young teens all wanting dance lessons. Another popular outfit was one that Michael wore to the 63rd Academy Awards in 1991, where he wore a white jacket with a brooch centred between the collar and on his arm, the Princess of Pop, Madonna.

Michael Jackson, however, was not without problems. His increasingly bizarre behaviour over the years of his life lead to the name, ‘Wacko Jacko’, a name Jackson despised. He was the source of constant rumours regarding his changing appearance, going paler and more chiselled as the years went on. He married twice; one was to the daughter of swing legend, Elvis Presley, Lisa Marie Presley and Deborah Jean Rowe, a long time friend who birthed two of his three children. The birth of his final son by artificial insemination with the mother being withheld.

In 2009 he sought a comeback and the, ‘This Is It’ tour came into full force when he took to the podium in London, remarking that this was his curtain call. The shows proved too much for Jackson who died on the 25th of June, 2009 at the age of 50.

With the passing of Michael came the grief of the entire world and the full force of Michael’s impact on the lives of others came into effect. The fashion industry was one, where full blown tributes where given to ‘The King of Pop’ with the likes of Givenchy’s gold studded jackets and Balmain’s crystal jackets all featured on their 2009 AW shows. Sequined gloves at Louis Vuitton show was a wink at Michael, and his presence when placed on a stage.

His style and demeanour on stage and off inspired and brought happiness to hundreds of millions of people and influenced many of the artists around today, each citing his powerful stage presence and commanding fashion.