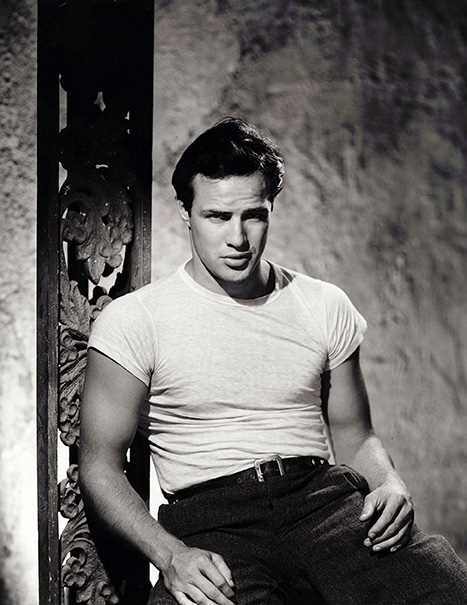 Marlon Brando is known today as one of the greatest male actors of American Cinema. Remembered for his sex symbol status, raw masculinity and brooding stare, he left every American boy wanting to be like him, and every American girl swooning over him. Brando appeared in over forty films, including some of the most iconic films ever made. Nevertheless, with his bad-boy image and undeniable handsome appeal, Brando like many other Hollywood stars before him, has become an enduring style icon.

Born in 1924 in Nebraska, Brando followed in the footsteps of his siblings in pursuing an acting career, by joining the Actors Studio in New York, where he was a student of the acclaimed Stella Adler, from whom he learnt the acting techniques of the Stanislavski System. His big break came in the film ‘A Streetcar named Desire’, for which he was nominated an Academy Award for Best Actor, and again in his next three films. However, it was his appearance in ‘The Wild One’ that really created his bad-boy image, and the image of him posing with his Triumph motorcycle has become iconic. His roles in the world famous ‘The Godfather’ and ‘Superman’ cemented his part in American Cinema and earned him numerous awards.

Like many other actors of the time, Brando possessed his own signature looks: a simple white tight fitting t-shirt was one of his staple looks, and he was often seen wearing one with a pair of blue jeans a cigarette in his hand. One of the most iconic pictures of Brando remains the image of him on his motorcycle from his film ‘The Wild One’. Here Brando is seen wearing a shiny leather jacket over a white tee and blue jeans whilst on a red bike. The leather jacket was a favourite of Brando’s, contributing greatly to his masculine bad-boy style. Yet Brando also knew how to dress up, he fitted the style of a suit perfectly, looking dangerously handsome in one. With a tie done up to the top, his jacket buttoned up and his hair slicked back, it’s no wonder why Brando’s style remains a heavy influence today.