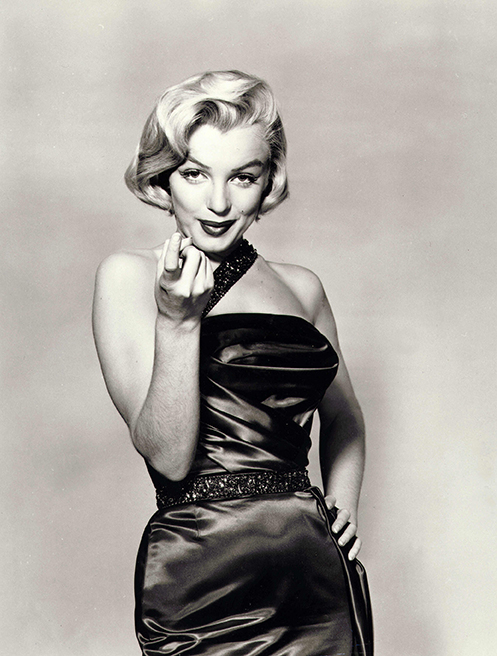 Marilyn Monroe remains to date, the biggest star that Hollywood has ever known. Achingly beautiful, stunningly glamorous and the height of feminine appeal, Marilyn Monroe has created the everlasting image of a blonde bombshell, leaving appeal that continues to influence women today. Born Norma Jeane Mortenson in Los Angeles, 1926, Norma Jeane spent the majority of her childhood in foster care before marrying James Dougherty and working in the Radio Planes Munitions factory. Here, it wasn’t long before she was spotted, and signed up with a modelling agency before attracting the attention of 20th Century Fox Executive Ben Lyons, launching the start of her legendary film career.

On screen, Marilyn was often typecast as the typical ‘dumb blonde’. Clad in an array of figure-hugging and extravagant dresses; these flaunted her overtly feminine curves and created an image of extreme sexuality. One of the most famous images of her is from promoting her film “The Seven Year Itch”. This photo featured the actress in a white, pleated mid-length dress, complete with a halter neck tie and plunging neckline, whilst standing over a grate with her skirt blowing up around her. The dress was eventually sold for £2.8 million.

Off screen, Marilyn’s chosen day time look was as far away from the glamorous and Hollywood lifestyle as possible. She preferred high-waisted trousers and shorts, paired with a classic black crop top. Wide V-shaped necklines also were a favourite, highlighting her shoulders and neck. High-waisted bikinis were also often seen on the star, emphasising her womanly figure.

Monroe’s beauty signature became famous in itself. A natural brunette, early on in her career the young actress dyes her hair peroxide blonde to meet the demands of the film industry, and from then on forever styled her hair in big soft curls just above her chin, complete in a side parting. From a young age, Marilyn had been captivated by the 1930’s actress Jean Harlow and turned to her for beauty inspiration. Full scarlet lips, a flick of black eyeliner, thick arched brows and a unique beauty mark all created Marilyn’s sultry and sexually seductive image, whilst paying tribute to Harlow.

In the late forties, Monroe signed a contract with 20th Century Fox and starred in numerous small roles. After the flop of “There’s No Business Like Show Business”, Monroe shot to the height of her fame in “The Seven Year Itch”, which became a huge success and led to her signing a new contract with 20th Century Fox. The four films that she was signed to make included “Bus Stop”, “The Prince and the Showgirl”, “Some Like It Hot” and “Let’s Make Love”. For two of the films, she was nominated for a Golden Globe and BAFTA. However it was also in this period that her health began to decline and she began to be treated by a psychiatrist.

There is no doubt that Marilyn Monroe was a genuinely talented actress, even though she promoted the image of herself as a ditzy blonde, she undeniably wasn’t. She led a troubled life, and struggled with long-term mental illness, hindering her journey to find true happiness. August 1962, Monroe died following a drug overdose and was placed in a crypt in Los Angeles.