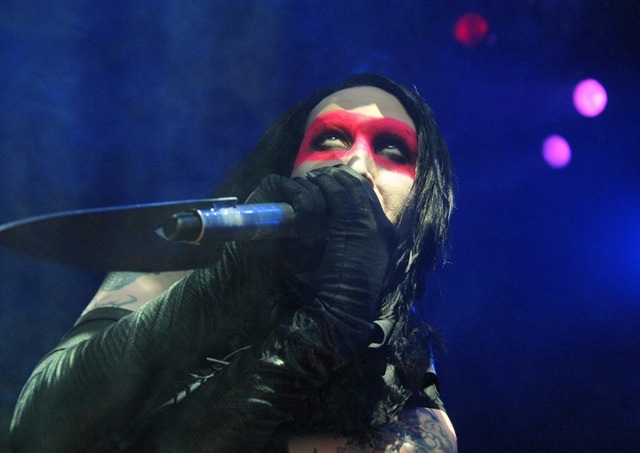 Leader of the enfant terrible, Marilyn Manson struck fear into many parents hearts but became an antithesis for teenagers everywhere stuck in the suburban nightmare.

Born on the 5th of January 1969 in Canton, Ohio, Brian Warner began his career as an aspiring music journalist, where he met music acts he would later share the same genre with.

It was 1989, and a twenty year old Warner, who was working towards a degree in Journalism, met with guitarist Scott Putesky and formed the band Marilyn Manson and the Spooky Kids. Marilyn Manson, a compound of Marilyn Monroe and the Californian cult leader Charles Manson, was a juxtaposition between beauty and the macabre, a fitting title for the leader of shock rock.

From 1992 onwards the band found instant success with a large cult following helping to bring the metal movement to the foreground with like of MTV airing music such as; ‘Sweet Dreams (Are Made Of This)’, ‘MOBscene’, ‘Tainted Love’ and their albums receiving platinum status within the US.

Marilyn Manson has always been glared upon by elders as a oddity and a character with grotesque connotations, linked through his music and his personal style.The dramatics of his looks delve into the sadomasochistic with skin tight leather, ghost faced makeup and an androgynous silhouette, transforming depending on his shows.

He has found success within the fashion industry with Vivienne Westwood saying: “I like his music; I like his brain, his looks and his style.” He recently walked the runway in 2011 for Japanese fashion designer, Yoshiki called, “Asia Girls Explosion”, utilising his influence on rock and roll. His personal style and performance attire can be related back to David Bowie, like David Bowie, his style was fitting for his music, and with the expectation surrounding him within the public eye, he has never disappointed.

Marilyn Manson has also been linked to famous actresses such as Rose McGowan, who, attending the 1998 MTV Video Music Awards shocked the press and audiences with her transparent chain mail dress and thong. Manson, during these ceremonies and most public appearances wore dramatic makeup, zombie like eye contacts and a loose suit with a matching hat, always in black, completely unapologetic to the mainstream glitterati.

His relationship with Dita Von Teese showed the eventual shift in what was considered beauty, withDita, an old Hollywood glamour type with Manson, the new age Gothic cult equivalent to James Dean.

As well as music, Manson has proved to be a triple threat, with links to film and art, staring in films such as, ‘Party Monster’ and ‘Phantasmagoria: The Visions of Lewis Carroll’, the yet to be released directorial debut. In 2010 he collaborated with David Lynch on a series of 20 paintings entitled, Genealogies of Pain.

Marilyn Manson has remained a style icon to many of those who reject the mainstream culture, choosing to express their identity and music tastes differently, and like Manson, remain true to themselves.