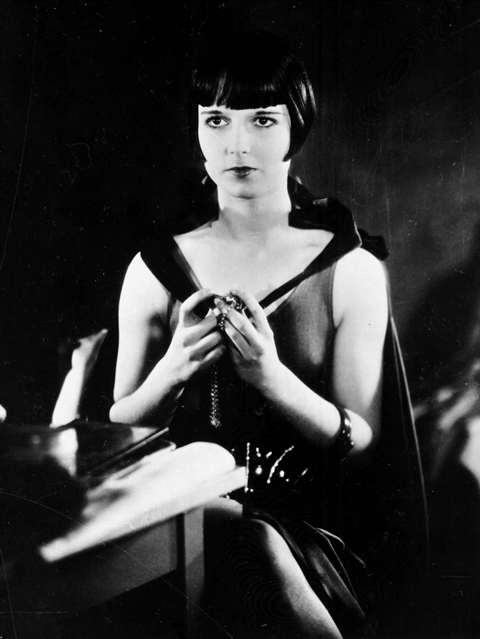 Louise Brooks possessed all the staples of the silent film era in regards to fashion: cloche hats, silk turbans, furs, pearls and countless drop waist dresses. She wore kohl smudged around her eyes, paired with a dark, precision-painted lip with an exaggerated cupid’s bow. She used these successful ingredients, as did so many of the other vamps and jazz babies of the roaring twenties. However, it is her iconic bob—tar-black with a blunt fringe, sharply angled alongside her stunning cheekbones—which set her apart from the soft curls and finger waves of other silent movie sirens. French film historian, Henri Langlois decreed, “There is no Garbo, there is no Dietrich, there is only Louise Brooks.”

Her razor-sharp cut has been replicated time and time again, seen on stars such as Selma Blair, Natalie Portman, Coco Rocha and Rooney Mara. Even Zooey Deschanel, with her long, enviable tresses, craves a Louise Brooks graphic bob.

The star was born on November 14th 1906 in Kansas, under the name Mary Louise Brooks.

Brooks began her career as a dancer, working with a modern dance company until she became a chorus girl in George White’s Scandals, before becoming a featured dancer in the 1925 run of the Ziegfeld Follies. Her time on Broadway caught the attention of Paramount Pictures, who offered the star a film contract. During this time she also began a summer romance with Charlie Chaplin.

Brooks made her film debut in The Street of Forgotten Men (1925), and gained popularity playing a vamp in A Girl in Every Port (1928). Her best-known roles were in European films: Pandora’s Box (1929), Diary of a Lost Girl (1929) and Prix de Beauté (1930). The films were heavily censored due to their adult content, controversial portrayals of sexuality. Off-screen, Brooks was very vocal and overt regarding her own sexuality. She spoke openly, and her private life and relationships were not hidden away from the media. She was married twice, to Eddie Sutherland in 1926 and Deering Davis in 1933.  Her memoir, Lulu in Hollywood, was published in 1982. Though her career may be considered short, Brooks succeeded in making an impact. The actress starred in 17 silent films, and never made the jump to talkies, despite pressure from the studio. Hollywood may have doubted her decision to retire from the movies, but her rebellious career-move would later secure her place as a legend of silent film.