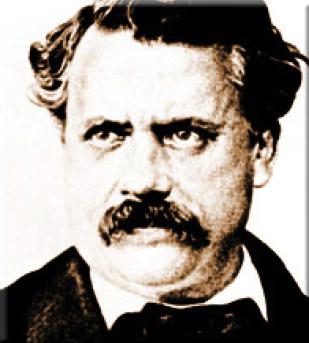 In 1835 Louis Vuitton decided to leave his birthplace in Jura to move to Paris. He travelled the 400 kilometres distance on foot, picking up odd jobs on his way to pay for his journey. When in Paris, Vuitton started working for established families as an apprentice Layetier (a trunk maker). With a well known reputation building, Vuitton was hired by Napoleon III of France as his wife, Eugenie de Montijo’s, Layetier. With his communications between French aristocracy and royalty, Vuitton began to understand what made good luggage. With his advanced knowledge he began to design his own luggage, creating the foundation for his future company.

1854 saw Vuitton create his Louis Vuitton label on the Rue Neuve des Capucines in Paris. With luggage previously comprising of rounded tops, to promote water running off, Vuitton designed a new style of trunk. In 1858 Vuitton created a grey Trianon canvas flat trunk that allowed the ability to stack the luggage. The new design was a great success, becoming prestigious and admired. The popularity became so great other competitors copied the Louis Vuitton style and design.

In 1867 the company entered into the universal exhibition in Paris. Worried about plagiarism of his style, Vuitton changed the Trianon design from grey to beige and brown stripes. Eighteen years later Louis Vuitton opened up its first shop in Oxford Street, London. With the constant imitation of his designs, Vuitton decided to create the Damier Canvas pattern in 1888. The pattern bared a logo reading ‘marque L.

Vuitton deposee’ translating to L. Vuitton registered trademark. Four years later in 1892 Louis Vuitton died leaving the company to his son, George. With an excellent reputation, the brands logo is now one of the most recognized in the world with the Vuitton luggage adding credibility to its owners.