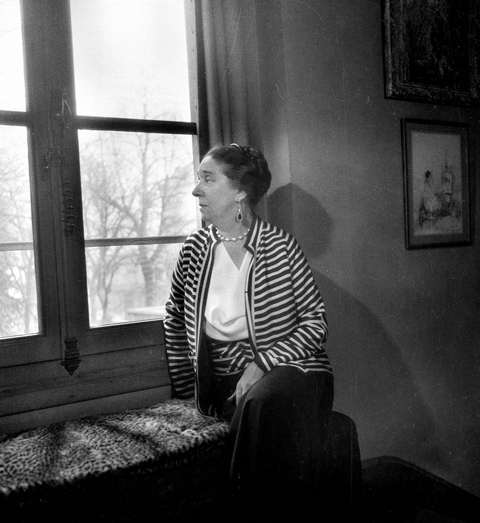 One of the oldest established houses in Paris, its founder Jeanne Lanvin,  was the eldest of eleven children. At sixteen she became an apprentice milliner at Madame Felix in Paris. She went on to train as a dressmaker at Talbot.

In 1889 Lanvin secured a job as a milliner at  22 Rue du Faubourg ,St Honore’. Here she developed her desire to own her own fashion house.

In 1897 Lanvin gave birth to her daughter Marguerite. Far from slowing her down, becoming a mother fuelled Lanvin’s entrepreneurism.

Mixing with contemporary artists, writers and musicians Lanvin created partnerships that represented her taste in the arts. In 1901 she designed a suit for Edmond Rostand, author of Cyrano. This was followed later with Lanvin dressing the silent movie star Mary Pickford and acclaimed writer Louise de Vilmorin.

Shunning society events, Lanvin focused on combining motherhood with her career pursuing her own ambitions. She started creating highly sophisticated outfits for her daughter resulting in her creating ‘fashion for children’.  This led to children’s clothing becoming her first line.  Launching her fashion house in 1909, mothers were immediately won over by the stylish designs and they requested similar clothing for themselves.

Lanvin built a reputation for femininity and simplicity and liked to use Grecian lines for youthful figures. By 1915 Lanvin was known for her mother and daughter creations.

With a passion for colour she was transfixed by blue. This interest led to her opening her own dyeing workshop in Nanterre in 1923.

Lanvin was the first designer to see fashion as a lifestyle. Clothes making was not enough. She was involved in a wide range of fields including home décor, lingerie, perfume, sportswear, fur and menswear. Inaugurating the principle of a brand, Lanvin extended her product lines to create the’ Lanvin World’.

Lanvin was a collector of fabrics which led to her appreciation of Coptic and Chinese embroidery. Also interested in the rich cultural heritage of Japan and Persia, she expressed her admirations through her fashion adorning her clothing with an artistic excess of ribbons, sequins, medallions, pearls and embroideries.

After Lanvin’s death in 1946 the company was left to her daughter, Margereete. Upon her death in 1958, ownership of the company passed to Margeete’s cousin, Yves Lanvin. Subsequently, various groups owned the fashion house until 2001 when the company was bought by Harmonie S.A. The same year the new owners appointed Alber Elbaz as Artistic Director.

Elbaz continues to rein supreme having given the luxury house an edge of Parisian chic.

Jeanne Lanvin directed her company incorporating her appreciation for contemporary arts and different world cultures. Believing fashion and art are one, she developed her idea of fashion before fashion was recognized as a concept.