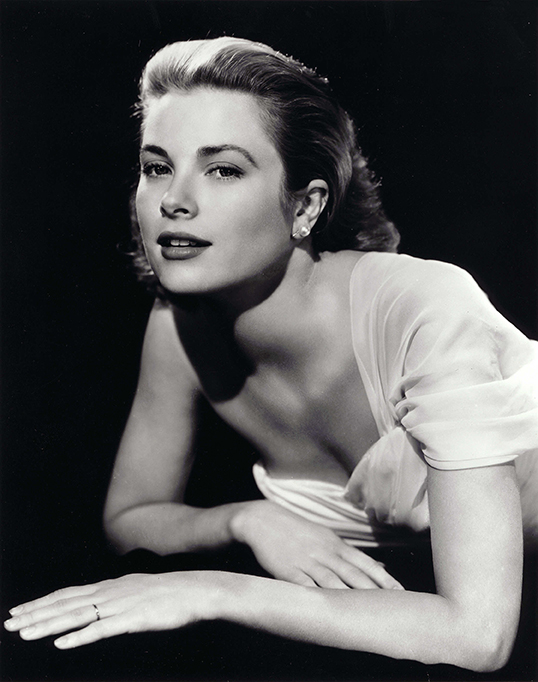 Grace Kelly was every girl’s fantasy: the enchanting Hollywood actress who lived the American Dream before becoming a princess and charming the world. Her feminine style and alluring look lives on today, as does her enduring status as a film icon. Her role as Princess Grace of Monaco played a great part in the shaping of the country, as she put her royal duties ahead of her career, regardless of the fact that she had only made eleven films in twenty-six years.

Born Grace Patricia Kelly in Philadelphia, November 1929, Kelly was raised in a wealthy Catholic family of Irish and German descent. It was very early on life that Grace showed an interest in fashion and theatre, modelling the latest designs at social events accompanied by her mother and sister and in 1942 she held the lead role in the play ‘Don’t Feed The Animals.’

Despite her father’s low regard for acting, Kelly enrolled in the American Academy of Dramatic Arts in New York and at the age of nineteen she graduated.

Kelly’s small successes on television eventually lead to her landing her first film role in the 1951 film ‘Fourteen Hours’, whilst supporting herself through an array of modelling jobs. However, critics did not notice her until her she starred in the films ‘High Noon’ and ‘Mogambo’, the latter of which earned her a Golden Globe Award for Best Supporting Actress and a nomination for an Oscar. It was her performance in ‘Mogambo’ (in the place of Gene Tierney) that gained her a seven year contract with MGM.

Today Kelly’s influence on fashion lives on more than ever, with typical staples of her wardrobe making reoccurring appearances on the runway; it’s no surprise that Kelly made the International Best Dressed List in 1960.  However, it was due to film costume designers, creating an image of a ladylike and elegant beauty, which shaped Kelly’s image that she was able to attain and embrace a sophisticated femininity. Moss Mabry, Edith Head and Oleg Cassini are just a few of the stylists that are attributed with the construction of Grace Kelly’s look and who’s creations appeared in many films upon the actress. One of the most famous images of Kelly is of her sitting on steps, in a large white netting skirt, and a black off shoulder top, depicting a seductive deep ‘v’ neck line. This image is credited to Edith Head for designing Kelly’s outfit for the film ‘Rear Window’ in 1954.

When talking about Grace Kelly the actress and fashion icon, it is impossible to not mention her transition into royalty and therefore Grace Kelly, the princess. In 1955 she met Prince Rainier III of Monaco, and begun a private correspondence with him, which evolved when he proposed to her in January 1956. She accepted, and later that year became Her Serene Highness The Princess of Monaco. However in 1982 tragedy struck and the princess suffered a stroke whilst driving herself and her daughter Stephanie to Monaco and ended up in hospital after the car went down a mountainside. Grace died the next day and was buried in the Grimaldi family vault.

Grace Kelly left an inspiring legacy behind her. Grace Kelly the Hollywood star still holds influence today through her eleven films, whilst the Princess Grace Foundation was set up in her honour to continue the work that she had previously encouraged; helping the acting and dancing community in America.

One thought on “Grace Kelly”