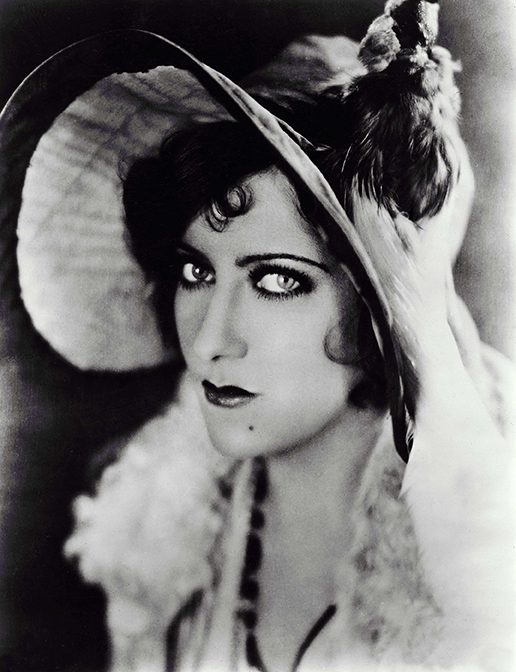 Audiences loved Swanson’s pictures directed by Cecil B. DeMille, not only for her performances, but also for the fashion. DeMille films were a visual fete, allowing the viewer to escape into a world of lavish set designs and haute couture gowns adorned with jewels, beading, sequins and feathers. Though the clothing was elaborate, the public embraced the styles.

During Coco Chanel’s brief stint in Hollywood, the famous couturier dressed Swanson for the film Tonight or Never (1931) She is credited with starting a trend for coloured gems in jewelry, after wearing an amethyst, emerald and gold necklace in The Affairs of Anatol. A 1923 fanzine commented, “Every time Gloria Swanson appears in a new picture, the market price of flannelette drops 10 points.”

This referred to the actresses influence on nightwear sales, as modest attire was replaced with fanciful chiffon confections. This was yet another of Swanson’s acts of inspiring audiences, contributing to fashion and effecting the consumer market

Though her style and fashion-filled movies gave her popularity with audiences, the actress tried to separate herself from her clotheshorse image, worrying that the glamorous costumes overshadowed the parts, stating, “I realize the clothes make me what I am, and I dread, at the same time, of becoming a mannequin sort of actress.” She wished to have more independence with her career and role selection, craving layered character parts that would showcase her talents, a decision that led to varying success.

Gloria Swanson’s jump to the talkies was a shaky one, with only two smash hit performances in The Trespasser (1929) and her most notable role as Norma Desmond, a silent film star, in Sunset Boulevard (1950), made over twenty years later. The role earned Swanson a Golden Globe for Best Actress and her third Academy Award Nomination.