Founded by Yoshiaki Fujiwara in 1986 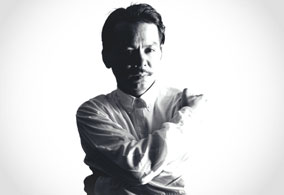 Yoshiaki Fujiwara founded Giuliano Fujiwara in 1986, launching the brand with a concept of Minimalism. Established in Milan, Fujiwara utilized a Japanese and Italian style, blending each countries design and manufacturing traditions, of avant-garde fashion and sartorial luxury. Focussing the company on menswear, the unusual designs spoke to a niche audience who respected the pure, distilled quality of the clothing. In 1990 Fujiwara was elected to become an official member of the association of Italian Fashion. A year later he established Fujiwara Design Studio S.R.L.

The company continued to operate steadily but without major success. Yoshiaki Fujiwara died in 2005. That year the company was bought my Japanese firm Steadfast. With this, the label started a global re-launch with Kiyomi Fujiwara helping to lead and ensure continuity for the fashion house throughout the change. Masataka Matsumura was appointed head designer. Since his appointment, Matsumura has been a key force behind the labels global status.

The firm signed a licence agreement for the manufacturing and distribution of a home furnishing and home design collection in 2008. The collections mirrored Matsumura’s eclectic personality who was keen to further push Giuliano Fujiwara as a lifestyle brand.

A flagship store opened in Milan in 2009 during men’s fashion week. This marked an important step of expanding the retail side of the company. In May that year the company held a retrospective prospective exhibition in Milan. From the combined efforts of Kiyomi Fujiwara and Masataka Matsumura the label opened its archives to the public. The recently opened flagship store exhibited the brands history from the 80’s forward, displaying selected original outfits, photographs, adverts and sketches.

The company continued to push their international presence opening a flagship store in Taipei, Taiwan in 2009. This was complimented by the company launching the Giuliano Fujiwara website for the computer, iPhone, iPad and other digital devices in 2011. Each platform was available in four different languages; English, Japanese, Italian and Chinese.

Giuliano Fujiwara is known for its minimal, simple clothes that feature asymmetry and architectural lines. The Japanese aesthetic is paired with the Italian idea of strong, luxury tailoring which results in beautiful modern designs.