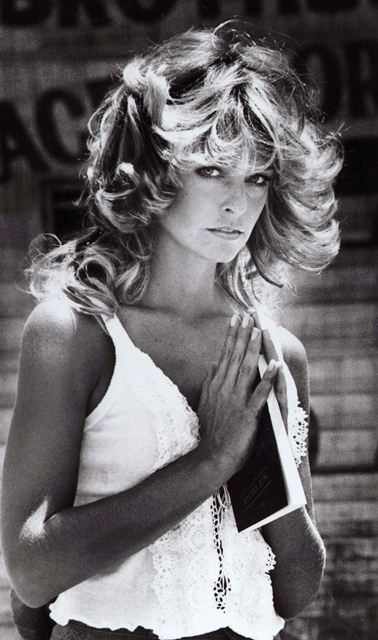 Farrah Fawcett , born 1947 in Texas, was a well known model and actress, famous for her trademark mane of golden blonde hair. In fact her haircut was so popular it went on to be copied around the world, with women requesting ‘The Farrah’.

At high school Farrah was voted most beautiful by her classmates, a photo of her also appeared in the Ten Most Beautiful Coeds while she studied at the University of Texas, Austin. This photo was seen by a publicist in Hollywood who persuaded then Farrah to move to LA.

Farrah reached iconic status in 1976 through the release of a  poster of her in a red swimsuit. This poster remains one of the most successful ever produced, selling over 12 million copies. Farrah reportedly styled her own hair and make up for the shoot, and even chose the final image.

Later in 1976 Farrah landed the role of Jill Monroe in what was to be one of the most successful TV shows of all time, Charlie’s Angels. The vast success of the show boosted sales of Farrah’s poster meaning she earnt more in royalties from the poster than from the show itself. After just one season Farrah left the show, there are many theories as to why she left, one being the strain on her marriage (to actor Lee Majors) or another possibility was that she left in order to further her career in other areas.

Farrah: “When the show was number three, I thought it was our acting. When we got to be number one, I decided it could only be because none of us wears a bra”

Throughout her acting career Farrah was nominated for 3 Emmys and 5 Golden Globes and though she is better known for her acting work, she also achieved great success in the modeling career, famously appearing semi nude for Playboy in 1995, and then again, to much controversy, aged 50 in 1997, the issue became an instant best seller. Due to her great success and iconic status Farrah has a star on the world famous Hollywood walk of fame. Farrah’s beauty also led the artist Andy Warhol also created silkscreen images of her.

Farrah was married to actor Lee Majors in 1972 but later separated in 1979. She then dated actor Ryan O’Neal, though there were rumours in the press the two never got married.

Farrah was diagnosed with cancer in 2006, she suffered a long and well documented battle with the disease, but she tragically passed away in 2009. A private funeral was held in LA. A foundation now exists in her name, which supports Cancer research, a limited edition Barbie was released in 2011, which quickly sold out, all proceeds went to the Farrah Fawcett Foundation.