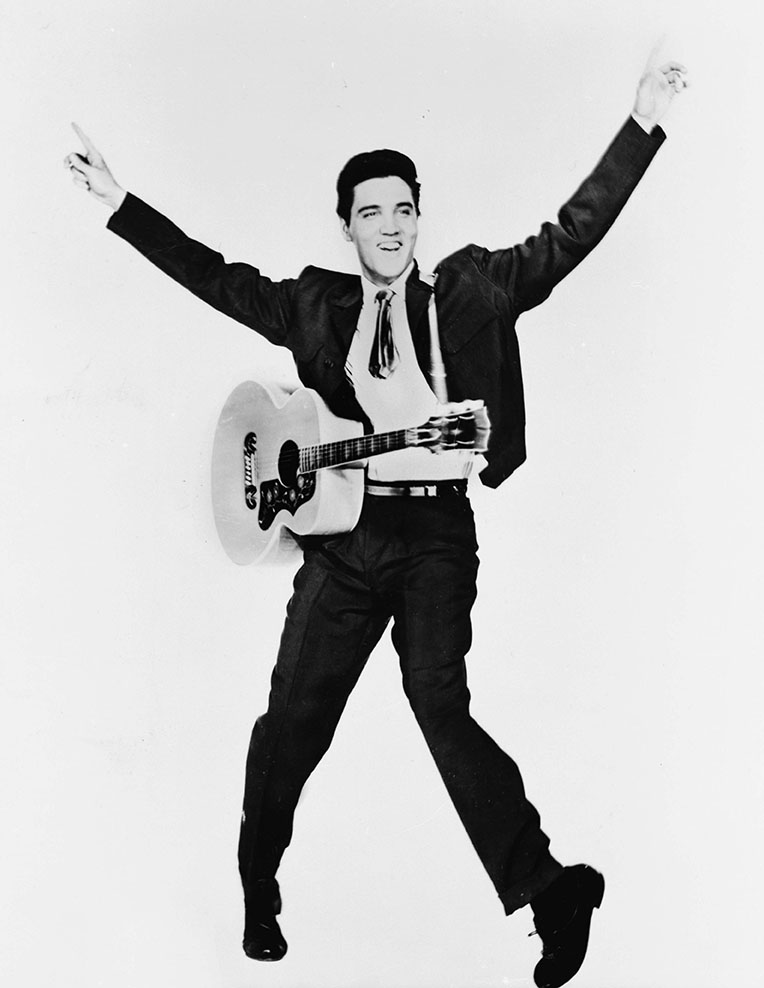 Hailed as ‘The King of Rock and Roll’, Elvis Presley is best known for his impact on the music industry and his roles in films, making him one of the biggest pop culture icons  and most notable male sex symbols ever. In addition to contributing to the massive breakthrough in the rock n’ roll revolution, Presley also made his mark by the outfits he wore when he performed, with a never-seen-before originality that captured the nation.

Born Elvis Aaron Presley in 1935 to two parents in Mississippi, he was an only child, and grew up listening to country music of the period. Church gospel music especially influenced him and it was this element in his voice that attracted him to future record labels. Straight after graduating from High School, Elvis was signed with the renowned record label Sun Records, in Memphis and by 1956 he was an international superstar. With a new sound that the world had never heard before, Presley broke and blurred the strict racial and social barriers, integrated music from all influences, and the result was a new era of US pop culture, which indefinitely changed the way the world viewed music. However despite his every-growing celebrity status, in 1958 Presley served the US Army as a private, willing to serve his country and play his part in the war. He was discharged in 1960 with the rank of a sergeant.

Whilst revolutionising the music industry, the outfits Presley wore became famous in themselves. Throughout his success in the fifties, sixties and seventies, music had its influence on his style, and his style held a strong influence on music. Always appearing fashionably dressed, Elvis had a specific rock n’ roll image to retain. One of his most recognisable features was his hair. Coolly slicked back at the sides and in a slight wave at the top of his head (and later on with a distinctive curl), his hair was what identified him as a rock n’ roll and sex god. Whilst not performing, Presley would wear shirts, tight trousers and a leather jacket, a casual yet still charming look. When Presley first gained the spotlight in 1954, he admired the clothes at Lanksy’s cloth shop in Memphis, promising that when he was rich he would buy them out. Even though that never happened, Lanksy’s became his go to place for clothes for years after; also gaining Lanksy’s a credible name.

Over the years, when Elvis performed, he liked to make a fashion statement. Follwing his return into the music industry from the Army, Elvis was looking to make a huge comeback, which he unquestionably did. In 1968, clad in a black leather tight outfit, Elvis made his comeback, perfectly adhering to the rock n’ roll persona which he had created for himself. This however was only the start of his outrageous dressing. In 1970, Elvis performed in what is probably recognised as his most famous outfit to date. The Elvis Aloha Jumpsuit caused a sensation in the fashion and music industries, and marked him as a sex god. The tight white jumpsuit features a high angular collar, which fell in a straight V down his chest. The outfit was adorned in patriotic red blue and gold gems, sporting numerous American Eagles.

Throughout his lifetime Elvis appeared in over thirty successful films, and earned himself a huge array of musical awards, including three Grammy’s and Multi-platinum awards. Elvis Presley played a significant part in changing the face of twentieth century pop culture and is recognised internationally for it. Elvis died in 1977 at his home in Graceland.