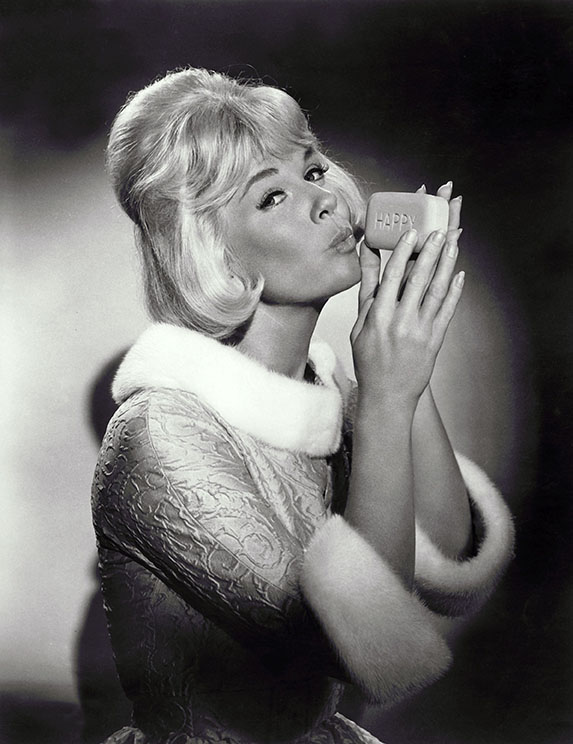 Doris Day, the typical ‘girl next door’ with an alluring smile and personality to match. Day is best known for her extremely successful singing career and her impact in the music industry, and secondly as a hugely talented actress, the biggest of her time. Day was born Doris Mary Ann Kappelhoff in 1924, in Ohio, and was of German descent. Like many other stars, she initially wanted to become a dancer, until a car accident damaged her legs, leaving her unable to pursue a dancing career.

Day started singing, and was particularly influenced by Ella Fitzgerald, and was soon enrolled in singing lessons with Grace Raine, who recognised her potential.  It was during her lessons that she landed her first job at a radio program and in a restaurant, where she was spotted by Barney Rapp and told to audition for a girl vocalist. She got it, and her first song she sung was ‘Day after Day’, using the title as inspiration for her name change in 1939. Soon after in 1945, Day received her first hit ‘Sentimental Journey’ which became widely known with the US troops in World War II.

After extensively touring around America, her popularity as a singer led her into an acting career. However, her dramatic film career was not as successful as she had hoped, and she turned back to her musical roots in films and in 1959 she became a star through the film ‘Pillow Talk’, for which she was nominated an Academy Award for Best Actress.

Day undeniably possessed a feminine charm, a smile that lit her not just her face, but her eyes too, and a real measure of talent. Whilst arguably not as glamorous and overtly sexual as other actresses of her time, Day allowed her audience to relate to her much more easily that to other film and music stars. Her sense of style was unique, and did truly represent her character. Whilst her short blonde bob is credited to her ‘good girl’ image, she always dressed herself in garments that, whilst being extremely chic, allowed her personality to come through. In films it was a similar case, she dressed to suit her figure, and always appeared smart, on fashion and very classic. Midi dresses in black or navy were paired with a cream coloured jacket, and skirt suits were nearly always in a pastel colour. All of day’s outfits in films (especially in ‘Pillow Talk’) were credited with different types of hats, yet most commonly Cloche hats, often accessorised with a ribbon or flower.

Doris Day became the top ranking female box office star of all time after appearing in thirty nine films. She also left a significant musical legacy of releasing twenty nine albums, and received a Legend Award from the Society of Singers. In addition to her film and musical status’s, she was also an avid animal rights activist, founding the Doris Day Animal League and Spay Day USA.