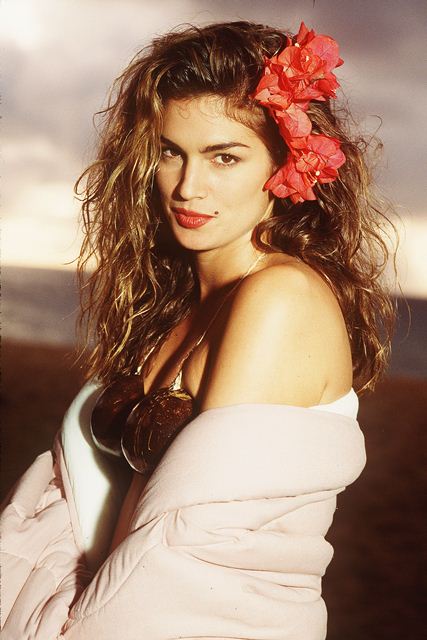 Cindy Crawford is one of the most iconic models of all time, she was one of the original ‘supers’, who changed the face of fashion modelling forever and her career has gone from strength to strength. Cindy is also famous for a beauty spot above her lip, though removed in earlier modelling photos it has gone on to be her signature trademark.

Born in 1966 in Illinois she was discovered by a newspaper photographer aged 16, the photo he took received such positive feedback she was inspired to try her hand at modelling. Cindy entered the Elite Model Management’s Look of the Year contest a year later and was the runner up, the Elite modelling agency in Chicago then signed her. Cindy studied at Northwestern University briefly before dropping out in order to pursue a full-time modelling career, she moved to Manhattan in 1986 and was then signed with Elite New York modelling agency.

Designer Michael Kors on Cindy Crawford: “She changed the perception of the ‘sexy American girl’ from classic blue eyes blonde to a more sultry brunette with brains, charm and professionalism to spare.’

Throughout the 80s and 90s Cindy was one of the most successful, stand out supermodels of all time and was a near constant presence on magazine covers, on runways and in fashion campaigns. She has appeared on the cover of top fashion magazines such as Vogue, W, Harpers Bazaar, Elle and Cosmopolitan and in total has made over 400 appearances on magazine covers. Cindy also appeared in many high profile fashion campaigns during her career, including ones for Versace, Escada, Revlon, Maybelline and Omega.

In 1988 Cindy posed for Playboy magazine, she was shot by renowned photographer Herb Ritts. In 1998 Ritts photographed her again for playboy, it was also Ritts who introduced Cindy to Richard Gere who she went on to marry.

In 2000 Cindy publically quit modelling, however she still appeared from time to time on magazine covers and in fashion shoots and also provided celebrity endorsement for a variety of products, one of these was a line of beauty products created in 2005 called ‘Meaningful Beauty’. In the same year Cindy also launched an interiors range called ‘Cindy Crawford Home Collection’.

Cindy was married to actor Richard Gere in 1991 but they later divorced four years later. She has been married to Rande Gerber since 1998, they have two children together.

Since stepping back form the modelling world Cindy has become heavily involved in charitable work. When she was 10 years old, her younger brother Jeff who she praises as “The fourth most influential person in my life” died of Leukaemia. Cindy has focused on raising funds for and awareness of childhood leukaemia; she has donated proceeds of her calendars to medical research. In 2007 she became an official supporter of the Ronald McDonald House Charities.