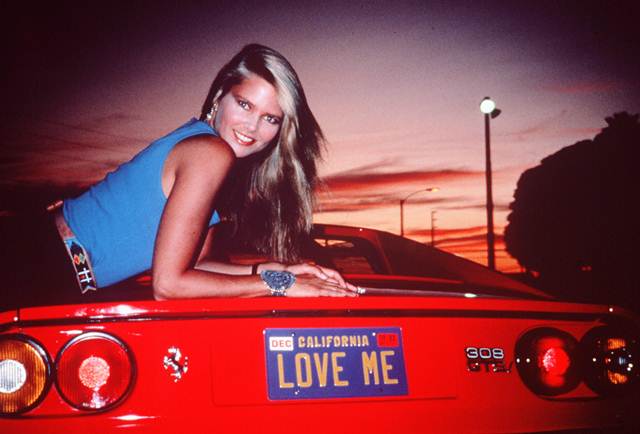 Christie Brinkley was born in 1954 in Michigan. After being raised in California Christie moved to Paris in 1973 to study art and it was here, while in a post office, that she was discovered.

Christie moved back to California and was signed to Elite model management. At the end of her first lunch with her agent Christie was signed to three national add campaigns. Modeling, however, was never one of Christie’s original aspirations as she didn’t consider her looks typically “model”.

“I was basically a surfer girl from California. I never looked like a model.”

Christie went on to appear in many successful campaigns and famously was the first model to appear in three consecutive swimsuit covers of Sports Illustrated. In total Christie featured on the cover of more than 500 fashion magazines including Vogue, Harpers Baazar and Cosmopolitan. Christie made fashion history again by holding the longest running Cover Girl cosmetics contract.

Christie made fashion history again with a 20-year contract with cosmetics brand CoverGirl, this is the longest in the history of the modeling industry. CoverGirl signed Christie again in 2005, using her in their adds for mature skin products.

Christie has been the face of Chanel N19 and in 1998 she also released her own fragrance, ‘Believe’. Ever the entrepreneur in 1983 Christie also wrote and illustrated a book ‘Christie Brinkley’s Outdoor Fitness and Beauty book’.

In 1991 Allure conducted a survey taking the pulse of the average Americans looking to measure their perceptions of beauty, Christie was considered to have the ideal all-American look. Christies blonde hair and blue eyes have always made her stand out, leading playboy readers to vote Christie one of the 100 Sexiest Women of the 20th Century.

Like so many other models Christie has been romantically linked to several high profile man and has had four marriages in total, French artist Jean-François Allaux, musician Billy Joel, Real estate developer Richard Taubman and lastly architect Peter Halsey Cook. Christie also dated Olivier Chandon de Brailles, heir to moet-champagne riches, who she met in the famous club Studio 54 while promoting her own calendar there.

Christie met Billy Joel when she appeared in the video for his video ‘Uptown Girl’, he proposed to her while she was still married to her first husband. Christie also painted the album cover for Billy Joel’s last CD’s ‘River of dreams’, Rolling stone went on to name it cover of the year in 1993.

As she has got older Christie has increasingly moved from modeling work to acting, her first role was in 1983 as ‘The girl in the red Ferran’ in National Lampoons Vacation. In 1992 Christie began her own television series ‘Living in the 90s-with Christie Brinkley.

Christie Brinkley is still very much in the public eye, in 2011 she made her stage debut as Roxie Hart in the musical Chicago. Christie now dedicates much of time to being an animal rights activist with PETA.