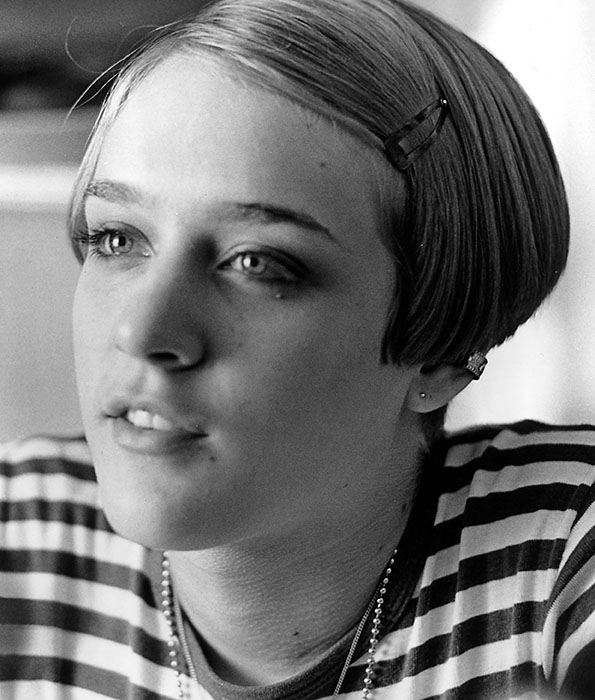 Born on the 18th of November, 1974 in Springfield, Massachusetts, Chloe began life in a calm modern American family environment, unlike the characters she has portrayed in movies.  But for Chloe, that was the problem she would spend her days working, smoking with friends and making her own clothes; the 90’s teen life almost depicted in any TV show of the decade. Except for Chloe it was boring and soon the buzz of city life was beckoning.

Her magnetic quality fared her well once she left the cushy surroundings and licked the pavement of the gritty Brooklyn streets at the age of 18 with her first appearance in magazines starting with Sassy, which featured her and made an intern.

Things slowly began to work in Chloe’s favour when she was spotted by Harmony Korine, who later cast her in cult classic, ‘Kids’ in 1995. From this point on wards Chloe chose to star in roles that appealed to her, with her acting style almost unprecedented in a true, honest depiction of the character and their situations. In 1999 she starred in ‘Boys Don’t Cry’ which garnered her with an Academy Award nomination.

Outside of her film career, Chloe became an underground darling, a leader in the grunge fashion sense of the 90’s, becoming idolised by teenagers around New York and the world. She was named the new ‘It-girl’ by Jay McInerney in a seven page expo for the New Yorker, critical attention for the newly noticed rising star.

Chloe has commented on this status saying: “I looked like a junkie because it was the nineties and grunge was the fashion. But I felt I was doing stuff, not just being a socialite.”

This ‘it-girl’ took hold of grunge fashion, making the effortless, colour-sieged alternative look and made it her own. She played with mixing prints and frilly small tops to robust loose denim overalls. This look, reflected the post Nirvana youth of middle America and designers began to emulate Chloe’s choice of style and unique tailoring.

A cover girl many times over, she became a favourite of similar genre brands such as Dazed and Confused, which placed her on the cover after the release of kids. Harper’s Bazaar to i-D have all ran deep editorials on Chloe, showing her mysterious, enticing quality that just keeps people guessing.

From her Academy Award nomination, Chloe entered the big leagues and began to form a rich spectrum of roles, whilst always maintaining her independent edge. In 2006 she joined Jean Tripplehorn and Ginnifer Goodwin in HBO’s Big Love, a show focused around a Polygamist Mormon family.

Chloe’s fashion has evolved as time as flowed into new decades with the expansion of Chloe’s own fashion penchant. Still a vintage girl, Chloe can be seen in Lanvin and Versace as seen at the ‘Lawless’ premiere in New York. Yet her androgynous and 90s throwback look still draws attention.

She has modeled for the likes of Miu Miu, fronting their recent AW 2012 campaign; rocking a Bowie aesthetic in the deep 70s geometric prints produced by the house, to the likes of Chloe, modelling the release of their fragrance.

Putting her own fingers to the thread, the release of a successful clothing line with Opening Ceremony saw Chloe tick off another fashion venture, with  a continued line for the hip New York brand – a perfect match for the Queen of indie cool.

A chameleon of sorts, Chloe has retained a charm and an irreverent attitude to her own fame; a rarity in a fame obsessed culture. Still marching to the beat of her own drum, she continues to grow as an actress and as a fashion icon, both so different but both ever so Chloe Sevigny