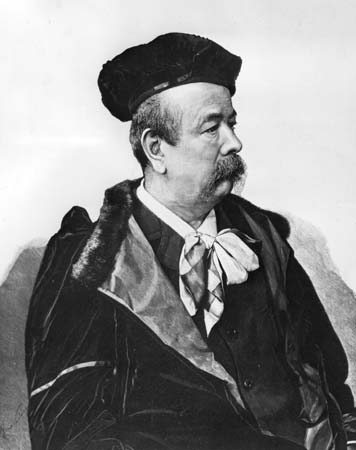 Charles Frederick Worth was forced to work after his father died. Apprenticed to Swan & Edgar haberdashers aged 12, he began to learn his trade.

By 1843 Worth had moved to Paris. Securing a job at Gagelin & Opigez, he sold accessories and fabrics. He met his future wife wife Marie Vernet, who was working as a sales assistant at the time. Worth started to design and dress his wife, which caught the attention of customers and eventually his employers. He was given floor space and started to sell his designs.

In 1858 Worth started a partnership with Otto Bobergh. They formed Worth and Bobergh, a dressmaking establishment. Worth started to sign his clothes, the first designer to do so, and caught the attention of French Empress Eugenie. Patronized by Eugenie, other rich, powerful women started to wear Worth’s designs.

Worth was one of the first designers to use models to display his designs rather than a mannequin. Having a talent to start new trends, Worth looked away from the full, large skirt silhouette and created a skirt with a flattened front and fullness only at the back. His new style was immediately popular and Worth commented ‘I am the man who dethroned the crinoline.’

Worth and Bobergh shut down their company during the Franco-Prussian War. In 1871 Worth reopened on his own, renaming his brand the House of Worth. He died in 1895 and left the business to his sons, Gaston and Jean Philippe.

Charles Frederick Worth was known for his true talent. Regarded as the founder of Paris couture, the English designer had a love for beautiful, luxurious fabrics. Worth used rich decorations, trimmings, colours and accessories for his designs, clothes that were often worn by Royalty and the elite.