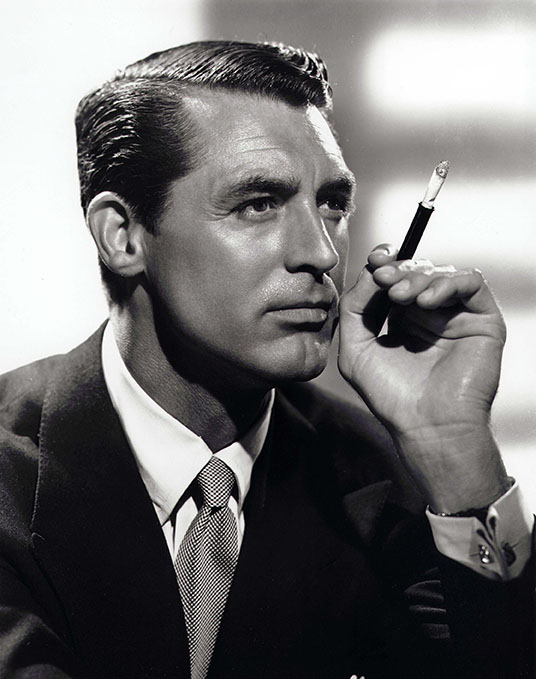 With a suave manliness and roguish smile, it’s no wonder that Cary Grant is one of the most influential male style icons of the 1950’s and 60’s. With an influence that still has a tight grasp over men’s fashion today, Grant is also considered as one of, if not the, most prominent male actors of Hollywood’s Golden Age, appearing in over seventy films and named the Greatest Male Star of All Time by the American Film Institute.

Born as Archibald Alexander Leach in 1904, Bristol, Grant was an only child who experienced an unhappy upbringing. At the age of sixteen Grant joined the ‘Bob Pender Stage Groupe’ as a stilt walker, and travelled with them to America to perform on a two year tour. After the tour was over, he remained in America and continued performing, gaining skills that would become valuable in his later acting career.

Grant first tasted the spotlight after appearing in numerous musicals on Broadway, and in 1931 he travelled to Hollywood and soon became signed with Paramount Pictures. In his time at Paramount, he appeared as leading man opposite some of Hollywood’s biggest actresses, such as Marlene Dietrich and Mae West. However it wasn’t until 1936 and when he signed with Columbia Pictures that his career really began. ‘The Awful Truth’ catapulted him to fame, and for the next thirty years he was one of Hollywood’s top box-office attractions. Over the next four years he established a name for himself in comedy, by featuring in films such as ‘Holiday’, ‘My Favourite Wife’ and ‘Only Angels have Wings’, to name a few. He also worked with the best of the best; he starred with Katharine Hepburn in three films and had four directed by Alfred Hitchcock, who enjoyed working with Grant.

With the world watching him, Grant needed to live up to expectations of not just his acting, but also of his sense of style. Initially, Grant turned to Fred Astaire for style inspiration, who enjoyed wearing stand-out bright colours. However Grant did not linger here long and soon developed his own aesthetic; one of a classic simplicity featuring simple monochrome block colours, giving the overall outfit a timeless effect that would not look out of place today. Masculine hues of navy, grey, and black in a three-piece suit all complimented the actor, contributed to his ‘dashing good looks’ and creating his signature look. Even though Grant always dressed with some formality and was never seen looking especially casual, cable-knit jumpers and cardigans allowed him a break from the suits he always wore whilst allowing him to be relaxed and still stylish. Brogues were often the shoe seen on Grant, a black of brown shade complimenting (but never matching) the suit.

Grants sense of fashion cut a fine silhouette, he always appeared well groomed, charming, and the epitome of masculinity. Women all over the world fell in love with the British-American in a smart suit, immaculate hair, and sparkling eyes who could make them laugh. Grant has left one of the most influential legacies on the film industry, having a statue of himself in the harbour area of his birthplace, winning over ten film awards throughout his lifetime and being acknowledged with an Honorary Oscar, Grant has left behind footsteps that will be hard to follow.