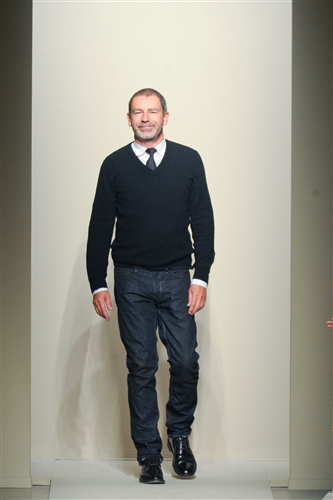 Founded in 1966 by Michele Taddei and Renzo Zengiaro

Established by Michele Taddei and Renzo Zengiaro, Bottega Veneta was created as a leather goods company founded in Vicenza, Italy in 1966. When the company began manufacturing in the sixties their sewing machines’ were not appropriate to work with leather materials. The company’s artisans were forced to use extremely fine leather to fit the sewing machines needles, which was then woven into the intrecciato pattern, making the material stronger. This quickly became a signature of the brand.

Due to the high quality of craftsmanship and the addition of the discreet no label design, popularity for the label grew. This led to an advertising campaign promoting it’s discreetness with a tag line of; ‘When your own initials are enough’. Taddei left Bottega Veneta in the late seventies, followed by Zengiaro shortly after. Laura Moltedo, a previous wife of Taddei, took over the company.

By the eighties the company was popular with the celebrity crowd. Andy Warhol, who shopped in their New York boutique, produced a short film for the brand. After the previous decade’s success, the 1990’s saw a decline in Bottega Veneta’s popularity. The company had ventured away from its understated vision and was following a more trend driven style.

In 2000 Moltedo hired British designer Giles Deacon to invigorate the fading brand. Under his direction the company released a successful ready-to-wear clothing line. However, in 2001 Bottega Veneta was bought by the Gucci Group, encouraged by Tom Ford. Tomas Maier was appointed as creative director in June the same year replacing Deacon. With his first collection in the autumn for S/S 2002, Maier set about returning Bottega Veneta to its former, discreet style, removing visible logos and highlighting the intrecciato weave. In 2005 the company showed its fine women’s ready-to-wear show and the following year presented its first men’s runway show. Also in 2006 the company opened its own school, Scuola della Pelletteria, to train future leather artisans.