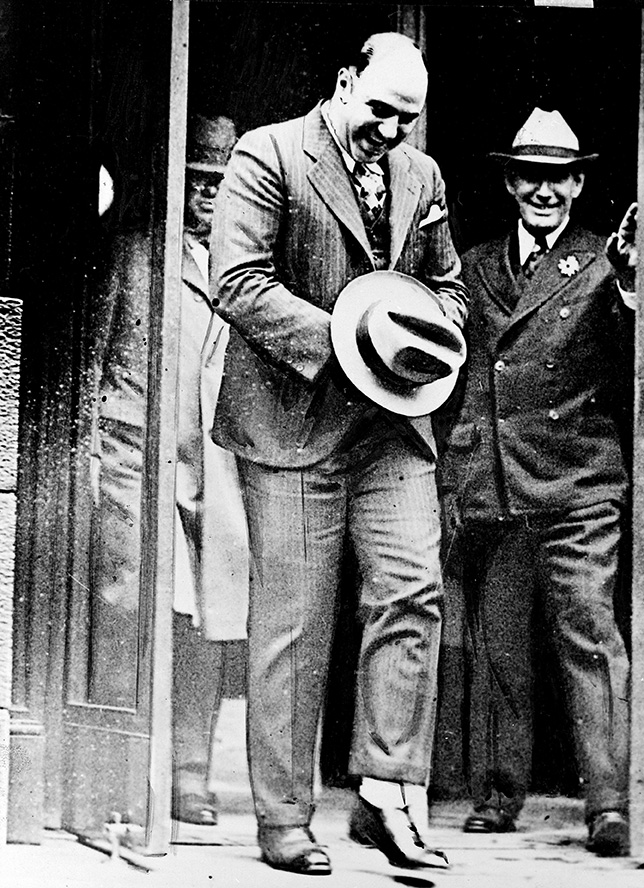 Viewed by many as a modern day “Robin Hood” and one of the most notorious American gangsters, Alphonse Gabriel “Al” Capone ran a Chicago-based crime syndicate in the Prohibition era, smuggling and bootlegging alcohol, amongst other illegal activities such as gambling.

Born in Brooklyn on January 17th 1899, Capone became involved in gang activity from a young age. He was a bright child, but exceedingly rebellious and was expelled from his strict Catholic school at age 14. He earned his nickname “scarface” after getting in a Brooklyn bar fight, and was mindful of hiding the injured side of his face in photographs. Capone moved to Chicago in his early twenties to pursue new financial opportunities there. He regarded the Five Points gang member Johnny Torrio as an influence, with Torrio becoming Capone’s mentor. Despite his underground reputation, Capone became a prominent public figure, making donations to various charities and community projects. He viewed himself as a businessman, simply supplying what the public demanded. Capone’s activities allowed him the wealth to purchase fine European-made custom suits, his famous cigars, and gifts for his female companions.

Al Capone was one of the pioneers of the image we’ve come to associate with gangsters in the 1920s. The stereotypical image of a crime boss in a navy pinstriped suit and fedora, replicated throughout the media, is based on photographs of Capone. The gangster created a uniform of Italian silk pinstriped single and double-breasted suits, worn with button down dress shirts with double French cuffs, a matching tie and pocket square to contrast with the shirt, suspenders and spectator shoes. Capone also wore a pocket watch, and either a fedora or panama hat.

Capone gained a lot of sway with Chicago’s city officials by rigging elections, allowing him to conduct his business with little interference. Al Capone’s reputation saw a rise in notoriety after his supposed involvement in the 1929 St. Valentine’s Day Massacre, where several of Capone’s rivals were killed. Though Capone’s role in the attack was investigated, he was eventually arrested on tax evasion, facing 11 years in prison, the longest sentence given for the charge at the time. After his imprisonment, Capone lessened his involvement in organized crime, though his infamy and influence have lived on with dedicated landmark tours and countless film and television portrayals. Esquire magazine recognized the gangster’s contributions to fashion, naming Al Capone third on their list of the best-dressed men of all time.

One thought on “Al Capone”