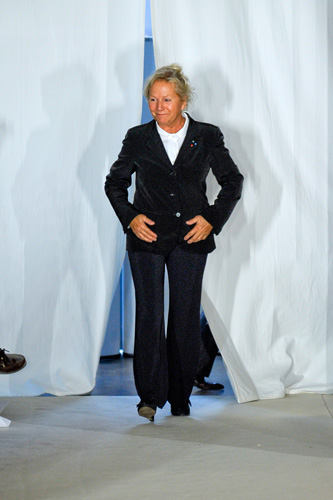 Agnès B, originally named Agnès Trouble, had a love of art from an early age, studying at the Cours Gufflet and drawing at Versailles’s Ecole des Beaux-Arts. Agnès married Christian Bourgois at 17 and together they had two children before divorcing in 1961. Throughout her short marriage Agnès continued her passion for art studying classical painting at the Louvre.

Soon after the couple had split, Agnès attended a dinner party, where her outfit caught the attention of Annie Rivemale, an editor at French Elle. Rivemale offered Agnès a job as a junior fashion editor. A year later Agnès began to assist Elie and Jacqueline Jacobson, the founders of Dorothée Bis as a stylist. This developed into Agnès starting to design, where she built up an admirable reputation over two years she spent there, before leaving to begin freelance designing.

In 1973 Elle was featuring a design Agnès had created for Limitex. The magazine asked her how she wanted to be credited, she decided Agnès B. This followed by the opening of her first Parisian boutique in 1975.

Agnès sold a mix of work clothes and basic items that she personally redesigned and dyed, to create an eclectic collection that she paired with her own designs. With her style developing, she started to create unadulterated, beautiful clothing that featured crisp, sharp lines.

In 1979 Agnès created the infamous Snap cardigan, the following year she began her expansion worldwide, opening her first store in New York. In 1981 the first men’s store was opened, which was followed by the first children’s collection in 1982. In 1987 Agnès B targeted Britain opening her first store in London. That same year Agnès launched “Le B Perfume”, a skincare and cosmetics line.

An advocate for cinema and music, from the late 1990s Agnès involved herself and her company heavily with both worlds. She’s received many awards recognising her talents and contribution to the fashion, cinematic and art worlds’. Most recently Agnès has been honoured with the prestigious Lègion d’Honneur and the Studiocollecor prize in 2010.

Agnès chooses not to attend fashion shows or frequent shops; she instead takes inspiration from people watching. Valuing her customer, Agnès will recreate past designs if a customer asks for her timeless clothes that ooze elegance. Each garment or product is made to easily adapt to every personality making any Agnès B. collection eternal.