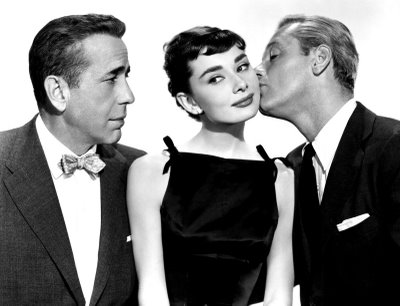 This was the film through which Audrey Hepburn was discovered as a muse by Hubert de Givenchy. She was sent to Paris to meet with a couturier who would design a gown for the newly glamourised girl who leaves for Paris a young tomboy and returns an elegant woman.  Needless to say after impressing Givenchy with her boyish figure and nonchalant charm, she returned to Hollywood with many “real Parisian” dresses.“She wanted a bare-shouldered evening dress modified to hide the hollows behind her collarbone”. “What I invented for her eventually became a style so popular that I named it ‘décolleté Sabrina'”.

Edith Head, as the costume designer for this film, was not best pleased that another designer was involved and when the film was nominated for an academy award for costume design and won, she accepted it as her own.

In this movie, Givenchy showcased Hepburn’s rake thin figure in a more sophisticated way and took her out of the boyish figure hiding clothes she was generally accustomed to with A-line dresses, hot pant shorts and fitted jackets.